ALBUQUERQUE, N.M. – The latest homicide happened in a busy part of town that doesn’t typically see a lot of violence.

KOB 4 spoke to the victim’s family and explains why justice may mean the shooter goes free.

“It’s a community and you know people here – they all talk and wave at each other.”

Just north of the busy intersection of 12th and Mountain sit flowers, two pints of vodka and a candle in front of a condemned house, as a memorial next to the blood stains spilled from Monday afternoon’s shooting.

“He had my heart and I had his,” said a niece of Carlos Romero. 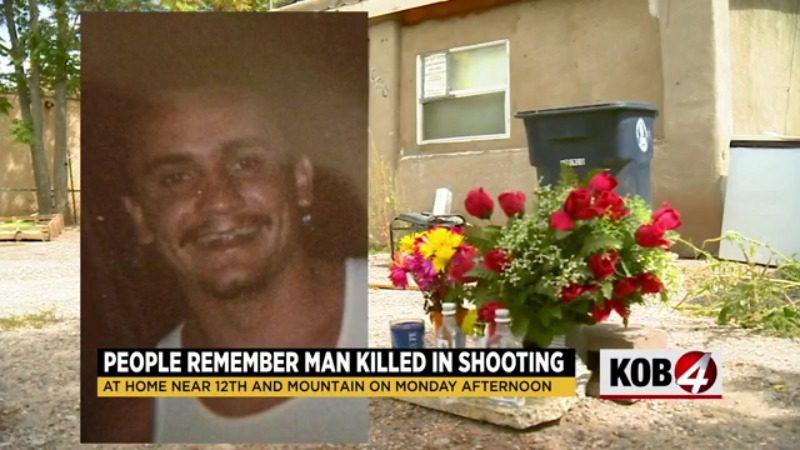 Carlos Romero was the man shot and killed, according to his niece who didn’t want to be identified.

“My uncle opened up his doors to a lot of people. You know, if they were ever hungry, come in and eat and grab you a chair. Let’s have a beer, whatever,” she said.

Police shut down the busy street around 4 p.m. Monday.

“I tried calling my uncle, first call, to see if he was OK, ’cause the cops were here. He didn’t answer and then later I got the news that he had passed.”

Police say a confrontation broke out between Romero and the shooter. However, the man who pulled the trigger may never face charges.

Police say they took a man into custody, however, the shooter might have acted in self-defense and that this is a possible justifiable homicide.

APD says this shooting would make the third justified homicide of the year. However, it is still under investigation.

“I’ve thought about moving away from Albuquerque because of all the violence. The only thing that keeps me here is my son and my grandkids, you know, my mom, my dad, my family,” said Romero’s niece.

Another family has been forever changed by guns in Albuquerque.

If you would like to help the family with their funeral costs for Romero, visit the GoFundMe page.