Republicans are hoping Florida Gov. Ron DeSantis can boost the campaign for Mark Ronchetti – the GOP nominee in the New Mexico’s governor race. Many analysts believe DeSantis may be a challenger for former President Donald Trump for the upcoming GOP presidential nominee.

The doors to the rally opened at 2 p.m. Sunday afternoon and when KOB 4’s crews arrived there was a line around the building to get in.

Congresswoman Yvette Herrell was in attendance as well Florida Gov. Ron DeSantis who made the trip out to support Ronchetti.

Ronchetti did well in the primaries back in June, he won the GOP nomination beating out four other candidates. He’s been hitting the campaign trail hard in southern New Mexico, even hosting an event in Soccoro just the other day. 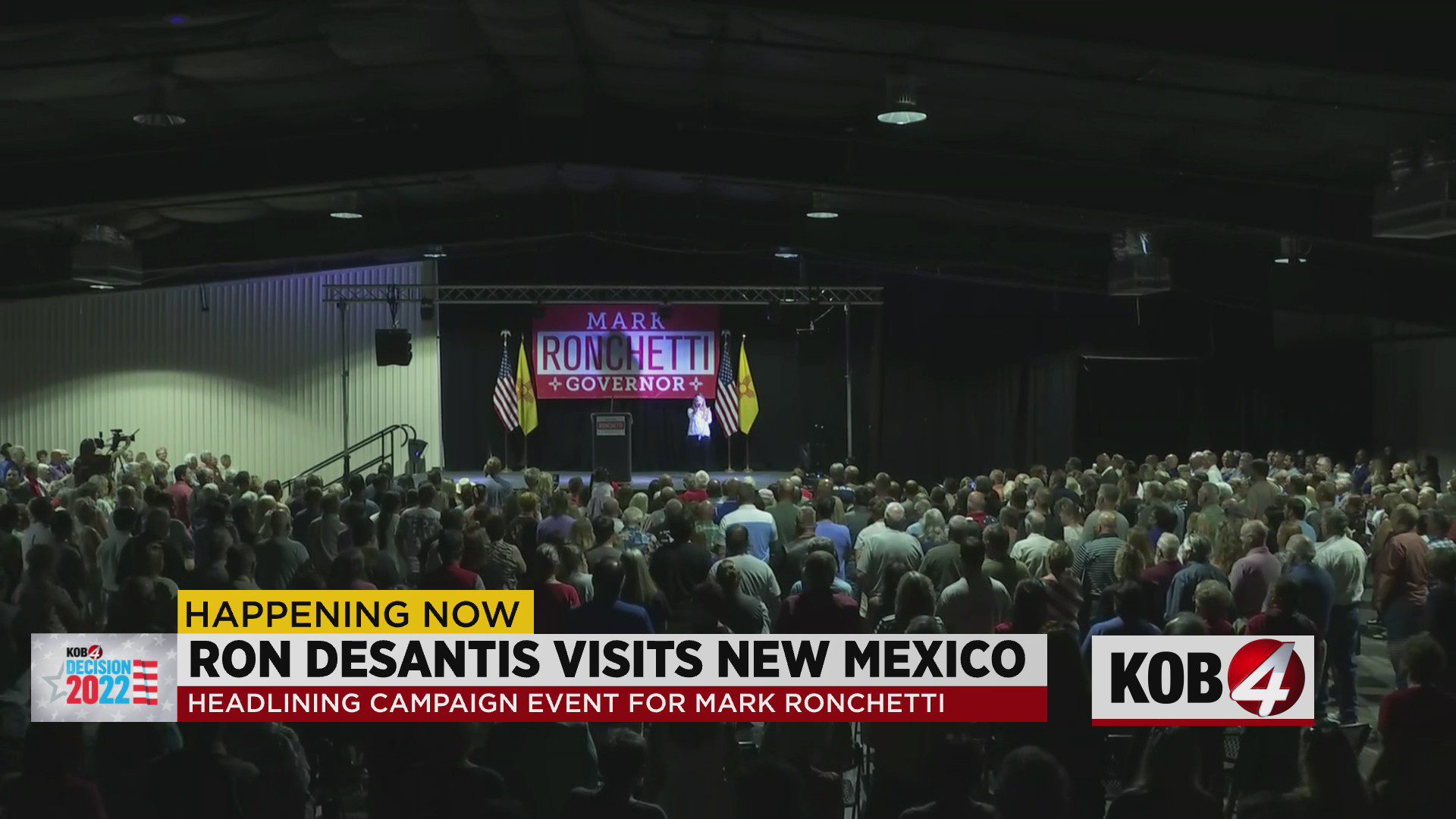 “Your governor had some of the most brutal lockdowns in this country, and you know how I know that? Because for the whole time during COVID Florida was a place of refuge for people,” said DeSantis.

Florida governor and Republican presidential hopeful Ron DeSantis made the cross-country trip to New Mexico to show his support for Ronchetti in person. He did not hold back in criticizing Gov. Michelle Lujan Grisham, calling her state COVID policies “Draconian.”

“We are not going to allow vax mandates in the state of Florida, no Floridian should ever have to choose oh, heck no Americans should have to chose between a job they need and a shot they don’t want,” said DeSantis.

Ronchetti said he wanted to take New Mexico back. He won the GOP nomination back in June – beating out four other candidates.

“What she’s trying to do is demonize anyone who doesn’t agree with her, I have never seen someone who is supposed to be a leader try to divide and pit people against each other like she does,” said Ronchetti.

Right now, he says the race is neck and neck. He also announced changes he wants to make if he wins in November.

“So here’s how we’re going to do it, number one we are going to end catch and release in the state of New Mexico,” Ronchetti said.

Finally, he called on voters of southeastern New Mexico to come out to the polls.

“And for our family we felt like if we could carry forward your voice and if you can bring your voice along with us, we will do something that will shock the country and the state of New Mexico when we take our state back,” said Ronchetti.

The Democratic Party of New Mexico responded Sunday night, saying DeSantis has a “radical right” agenda and that he does not represent New Mexico. The party chair calls the Florida governor’s views “extreme,” and criticizes his state’s “Don’t Say Gay” bill.

“By campaigning with DeSantis, Mark Ronchetti and Yvette Herrell have made it absolutely clear that they are aligning themselves with the radical right and will bring nightmare GOP policies right here to New Mexico,” said Jessica Velasquez, chair of the Democratic Party of New Mexico.

Velasquez says voters should not appreciate the connection to Florida.

At the national level, a Democratic Party spokesperson adds that the Republicans who spoke Sunday stand for cutting taxes for the rich at the expense of middle-class families.

#HAPPENINGNOW a rally for republican candidate for Governor Mark Ronchetti is starting. Florida Gov. Ron DeSantis is set to speak later today. We’ll have a wrap of the event tonight on @KOB4 pic.twitter.com/f5w9i6DDJz