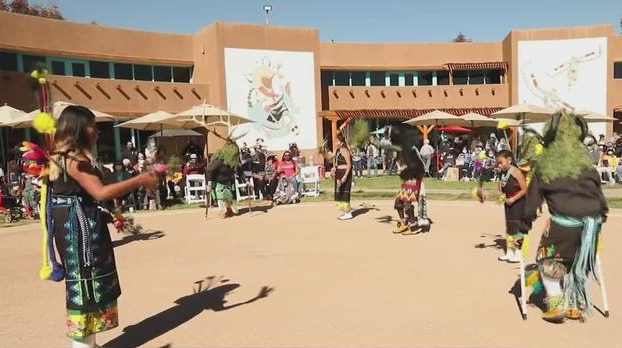 ALBUQUERQUE, N.M. — For the fourth year in a row, Indigenous Peoples’ Day is being recognized as an official holiday in New Mexico – and there is plenty going on.

New Mexico is one of 17 U.S. states to formally recognize Indigenous Peoples’ Day. In the Land of Enchantment, there are 23 Indian tribes – including 19 pueblos, the Navajo Nation and 3 Apache tribes.

At the Indian Pueblo Cultural Center, the tribes were honored with special events throughout Balloon Fiesta week, capped off by a celebration on Indigenous Peoples Day.

This event formally kicks off at 9:30 a.m., with tribal, state and national leaders speaking, including Mayor Tim Keller and Congresswoman Melanie Stansbury.

Then at 11 a.m., cultural dances begin with the Black Mesa Dance Group from the San Felipe Pueblo.

Two Santa Clara Pueblo artists will be doing a pottery demonstration and an artist of Choctaw, Santo Domingo and Navajo descent will be giving a painting demonstration.

Tickets include museum admission and are $12 for adults but $10 for New Mexico residents and military members. It is free for IPCC members and all Native Americans – and tribal members are encouraged to wear traditional regalia. More details are available on the IPCC website.

The Santa Fe Indian School kicked off the day with a morning prayer and Po’Pay Run at 7:30 a.m. Po’Pay was a Tewa leader who organized the Pueblo Revolt of 1680 which, according to historians, was North America’s first successful uprising against colonial forces.

The Feast Day event is open to the public or you can stream it on their YouTube channel if you can’t make it. If you do go, you’re asked to wear a face mask on campus.

The film, “Lakota Nation vs. United States”, chronicles the Lakota people’s quest to reclaim the Black Hills and their perspective on Lakota-U.S. relations, as it relates to reparations for past wrongdoings.

Two Oglala Lakota members – the film’s director and the film’s writer and narrator – will give an introduction.

Tickets and more information are available online for a suggested donation of $10. A reception will also take place across from the KiMo after the event.

This event will feature entertainment, voting information, free groceries and free T-shirts, as well as a meet and greet with two TikTok creators. The event is sponsored by the Americans for Indian Opportunity and the National Urban Indian Family Coalition.

Senior Exhibition at the Institute of American Arts

Trash and recycling collection will continue normally in Albuquerque but will be shifted by a day in Santa Fe.

ABQ Ride and Sun Van services will continue normally, as well as trash and recycling in Albuquerque. All BioPark facilities, the Everyday Adoption Center, all golf courses, swimming pools and tennis facilities will remain open in Albuquerque for Indigenous Peoples Day. More information is on the CABQ website.

The animal shelters will be closed except for intake and reclaims. Credit card payments will not be accepted for reclaims.