SANTA FE, N.M. — A state district court judge ruled Otero County Commissioner Couy Griffin be disqualified and barred for life from any office, due to his participation in the Jan. 6 attacks on the U.S. Capitol.

In the ruling, Judge Francis J. Matthew cited Section 3 of the 14th Amendment to the U.S. Constitution, which stipulates the consequences for any public officials who participate in an insurrection. The judge ruled the Jan. 6 attacks met the definition of an insurrection and that Griffin participated in the attacks, which disqualified him from holding or seeking local or federal office as of Jan. 6, 2021.

Court documents extensively detail the nature of Griffin’s participation in the Jan. 6 attacks and what the judge says were ‘meritless arguments’ presented by Griffin as a defense.

KOB 4 talked to Griffin and one of the lawyers who helped push for his removal. Of course, they were two completely different conversations.

While the attorney says the judge’s ruling was fully supported by the facts in this case and the law. Griffin says he was surprised and disappointed by the outcome. 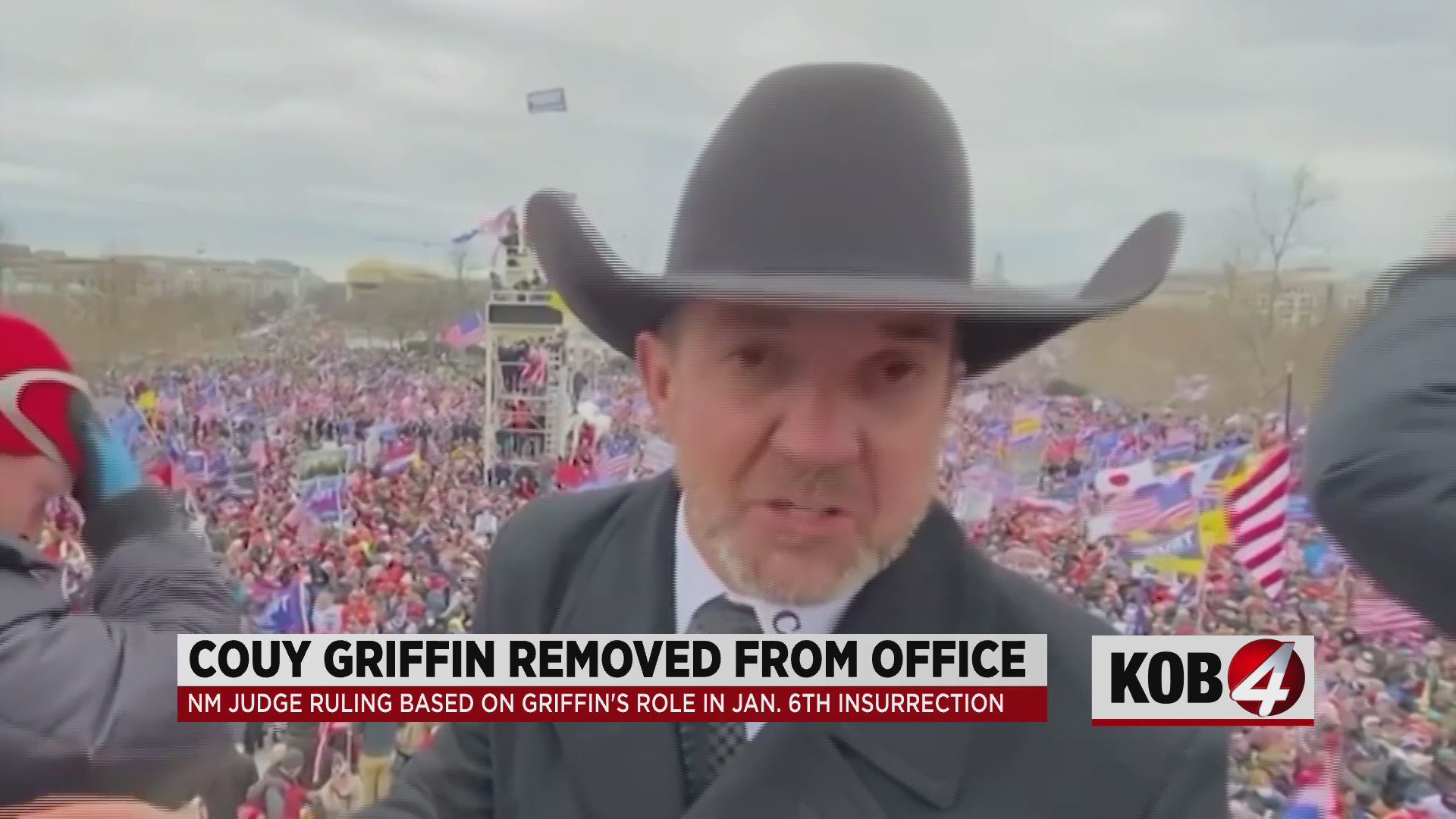 “I was shocked by the word that I got this morning from the county manager here in Otero County,” said Griffin.

Griffin says he’s hardly had time to process the New Mexico judge’s ruling to remove him from office.

“She called me up and said that they had confiscated my computer this morning and change the code on the door,” Griffin said.

Although he says he did see it coming.

“I saw the the the body language of Judge Matthews, I could read him from the very beginning that he had disdain towards me and I could tell that he didn’t like me,” said Griffin.

“He gave a political verdict, not a not an evidence-based verdict,” he said. “I can’t say that the fight is over, you know, because the ruling that Judge Francis Matthew gave today Brianna has no jurisdictional standing.”

But attorney Joseph Goldberg — who represented those who filed a lawsuit to remove Griffin from office – says he has to disagree.

“The judge’s ruling was fully supported by the facts and by the law and the judge did the correct thing in removing Mr. Griffin from office,” said Goldberg.

Goldberg is a partner with Friedman, Boyd, Hollander and Goldberg one of multiple law firms that have been pushing for Griffin’s removal.

“The law requires accountability for one’s actions,” said Goldberg. “This is a very important ruling that the judge’s ruling vindicates the 14th Amendment.”

The “disqualification clause” in the Constitution played a major role in Tuesday morning’s ruling. It basically prevents people from holding a state or federal office if they took an oath to support the Constitution and then participated in an insurrection or rebellion or gave aid or comfort to insurrectionists.

“I, in a sense, was convicted of insurrection and my actions on Jan. 6, did not reflect that of a person that was there to overthrow the government,” said Griffin.

Griffin says he plans to appeal Tuesday morning’s decisions and has already taken steps with that process.

Goldberg says Griffin’s appeal will go straight to the state Supreme Court where he believes it will be resolved quickly.

Griffin was previously convicted of a federal misdemeanor for entering the Capitol grounds on Jan. 6, 2021. In June, Griffin was sentenced to 14 days and given credit for time served.

On the day of his sentencing, the New Mexico Supreme Court ordered the Otero County Commission to certify the county’s June 7 primary election results. Griffin and other commissioners had refused for ten days, alleging concerns about voting machines and individual votes.