Fans pack The Pit for sold out Lobo vs. UNLV game

ALBUQUERQUE, N.M. – More than 15,000 fans packed The Pit to cheer on the Lobo men’s basketball team against the University of Nevada Saturday.

The Lobos were the only undefeated college basketball team in the country on Monday, but that ended with a heartbreaking loss at Fresno State Tuesday.

But, UNM still hit a milestone with a sold-out crowd at home for the first time in years, and there was a ton of energy surrounding the team, and a ton of support.

It was a big night for the team and the fans regardless of the final score. Fans we talked with were beyond excited to be a part of all the hype Saturday night. 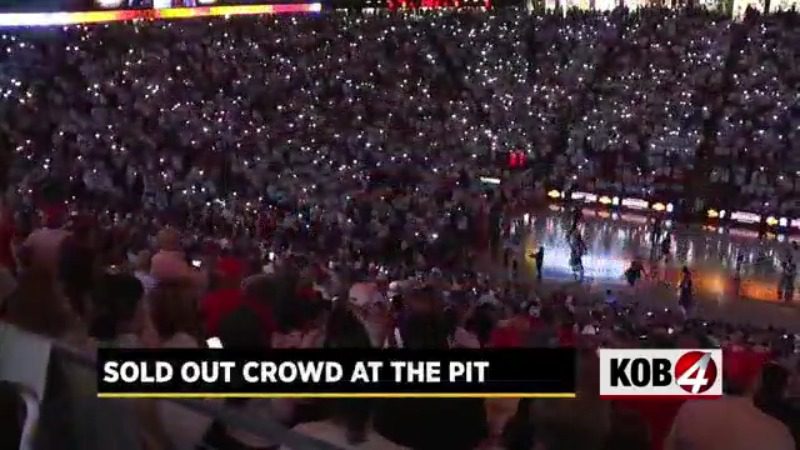 Most folks who attended are diehard Lobo fans who were going to be at this game no matter how the season started out.

But others admitted this was their first game of the season and that wasn’t on accident.

“Just the environment, the excitement, you know? We haven’t had anything like this in years where we had a lot of competition, good teams like this, very competitive, just seeing what we have now, it’s good to see that,” said Robbie Vasquez, a Lobo fan.

“Being able to come out and support the Lobos and have all of your family and friends come out, and have a great time and be able to do this is really awesome,” said Angela Gandy, another Lobo fan.

A good portion of fans were waiting outside The Pit before the doors even opened — some even waited an hour in the cold.

One couple told us they flew in from South Carolina just for this game. But most fans were happier to see how many locals came out to support the Lobos.

“It’s definitely time that the locals got back into the spirit, the spirit, that’s the best way to put it,” said Isaiah, a game attendee.

Despite the last-minute ticket sales, UNM leaders say they’ve been preparing for this matchup for a while.

“We’ve been working with our staff over the last, honestly, probably for the last several years on preparing for this moment,” said UNM Athletic Director Eddie Nuñez. “I’m proud of our coaches. I’m proud of our student athletes. This is a combination of everybody working together to make this possible.”