ROSWELL, N.M. – Sometime next year, people are likely to see a new space-themed sculpture in downtown Roswell, a years-long project that is moving forward.

An iconic 26-foot metal rocket slide, at a local park, will be transformed into a work of art.

Josh Berry is the artist tasked with turning the remains of the antique piece of playground equipment into a sculpture for future generations to enjoy.

Like most people who have grown up in Roswell, Berry has fond memories of slides, that as a child he called “the scorcher” because of the heat he would feel when going down it.

“I spent birthdays there, and summers there, my friends, and I went there,” he said. 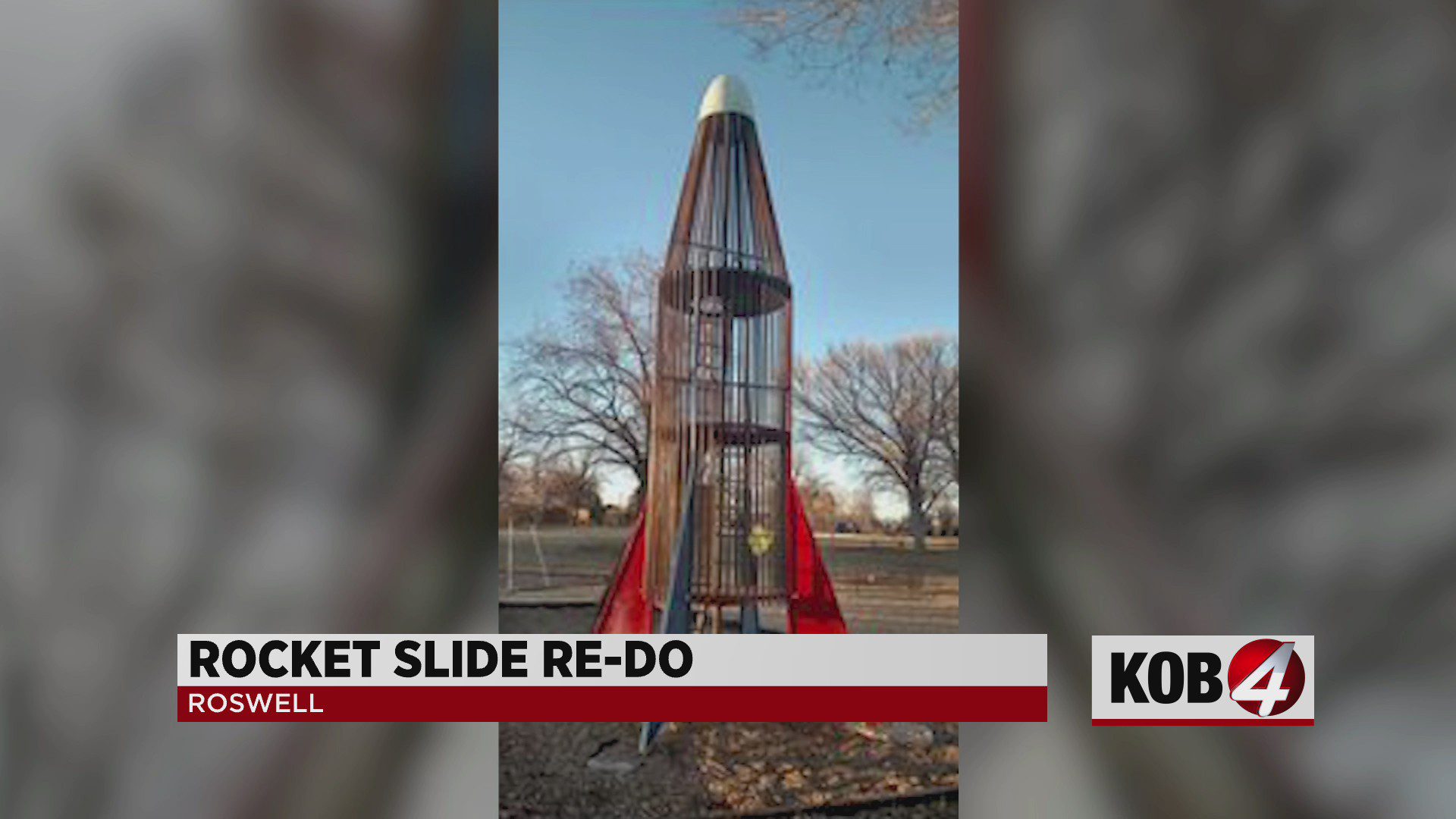 The 26-foot rocket-themed slide had been at Peppermint Park, later known as the Spring River Park and Zoo for decades. But in 2018, it was decommissioned because of safety code violations and its deteriorating condition. And was replaced with a newer model.

Similar slides were popular in the 1950s up through the late 1970s. Berry said by the 1980s they stopped being made and now there are fewer than 10 remaining in communities across the United States.

Given the connection so many people had for it, and Berry’s love of rockets and all things vintage, he and then-city councilor Jacob Roebuck, came up with the idea to repurpose it into a sculpture.

“Since they can’t slide down it anymore, maybe they can take their kids to it. And see it, and enjoy it, and reminisce, and take pictures and selfies and what have you,” Berry said.

The city council eventually put up $75,000 for the effort. And earlier this month voted to place the eventual finished product on the southwest corner of Pioneer Plaza in downtown Roswell.

Much about the rocket will stay the same, such as the red, white and blue colors. But there will also be upgrades to it. For example, it will be about 10-feet taller, it’s wings will be wider and a replica of a rocket engine will be placed at the bottom, and it will be outfitted with LED lights.

The road to taking the proposal from idea to planning has not been without its challenges.

Berry said at first, many councilors were skeptical about the project.

“When we took it to city council, some people obviously don’t think it was necessary. They see it as an old, rusty piece of equipment that should be tossed,” Berry said.

But after several meetings and some adjustments, the concept won over councilors and city officials. The COVID-19 pandemic then delayed things further.

Now though, the project is moving forward, and Berry says he has received a lot of feedback from locals, as well as people across the country who have had childhood memories from similar slides in other communities.

“It struck a nerve with people and that’s awesome,” he said.

With planning done and construction set to soon start, Berry said he knows the project will consume much of his time for the next year.

He added though while it takes a lot of time and he will make little money on it, that the project for him is a labor of love.

“I choose to do it because it is so important to me and special to me, and such a big part of my history. And I really don’t want it to be lost to a recycling plant,” Berry said.