SAN MIGUEL COUNTY, N.M. – Many communities were hit hard with rain this weekend as roads flooded, and officials recommended evacuations.

KOB 4 spoke with one resident whose ranch completely burned down during the fire, this weekend his property was under four feet of water.

Lifelong resident of Maestas Canyon, Rey Herrera, was on his lunch break when he was hit by a flash flood.

“All the mud on the planet it could come down Maestas Canyon and also Gascon Canyon, it came down. It caught us totally by surprise yesterday me and my worker were in 4 feet of water almost instantaneously and we are lucky to escape with our lives,” Herrera said.

But the water wasn’t the only thing he was caught off guard by. 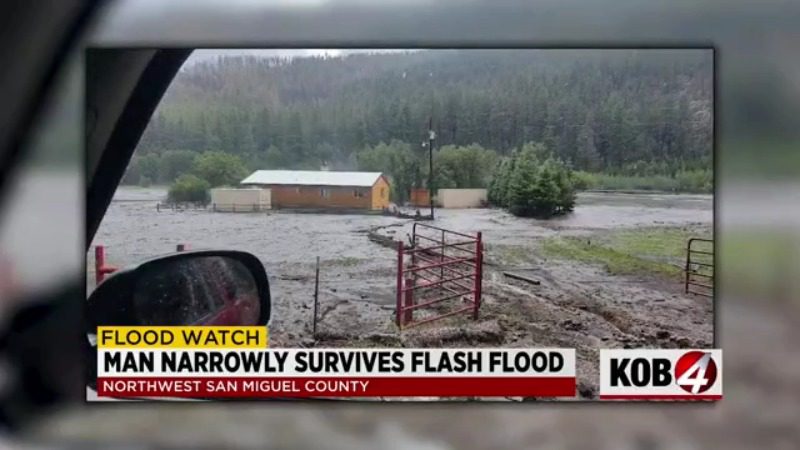 “All of a sudden, the inside of the cabin got very dark because of a big shipping container came floating down stream, in about four feet of water, and crashed right in the side of the cabin,” Herrera said.

Herrera said he booked it to his car.

“My front end was all jammed up with logs and rocks and everything, and my only choice was to roll down my windows, because I thought it was going to take my vehicle, and I needed a way out. I opted to take one more effort to crawl under my vehicle and hold on to the underside of my front end to be able to keep myself from floating down stream,” said Herrera. “I was able to remove the debris from my four-wheel drive and engage four-wheel drive and gunned it out of where I was.”

Herrera says it’s time residents have a voice in what happens to the land around them so that maybe these kinds of disasters can be avoided.

Herrera later delivered seeds to help regrow some of the burnt forest.