Despite having spent a combined $1 million on campaigning, Brian Colón and Raúl Torrez haven’t moved the needle for most prospective Democratic primary voters. The two attorney general candidates run behind “undecided” in the latest KOB 4/SurveyUSA poll.

38% of certain or probable primary voters said they hadn’t yet made up their minds about the election. Torrez, the Bernalillo County District Attorney, ran second with 34% and State Auditor Colón polled at 28%.

It’s been decades since New Mexicans elected a Republican attorney general, so a win in the Democratic primary is a vital step toward victory.

A longtime player in state Democratic politics, Colón was thought by many politicos to have the edge over Torrez. Colón has raised more than $1.5 million so far, a number that handily outpaces Torrez’s $1 million. But the district attorney has outspent Colón, who goes into the home stretch of the primary with a sizable lead in money ready to spend.

“It’s an even race, but that [Colón] is not running stronger is a little bit surprising,” said UNM political science professor Tim Krebs, who said Torrez is likely benefitting from what campaigns refer to as earned media. Occupying a high-profile law enforcement post in the biggest media market in the state means the district attorney often appears on the evening news. 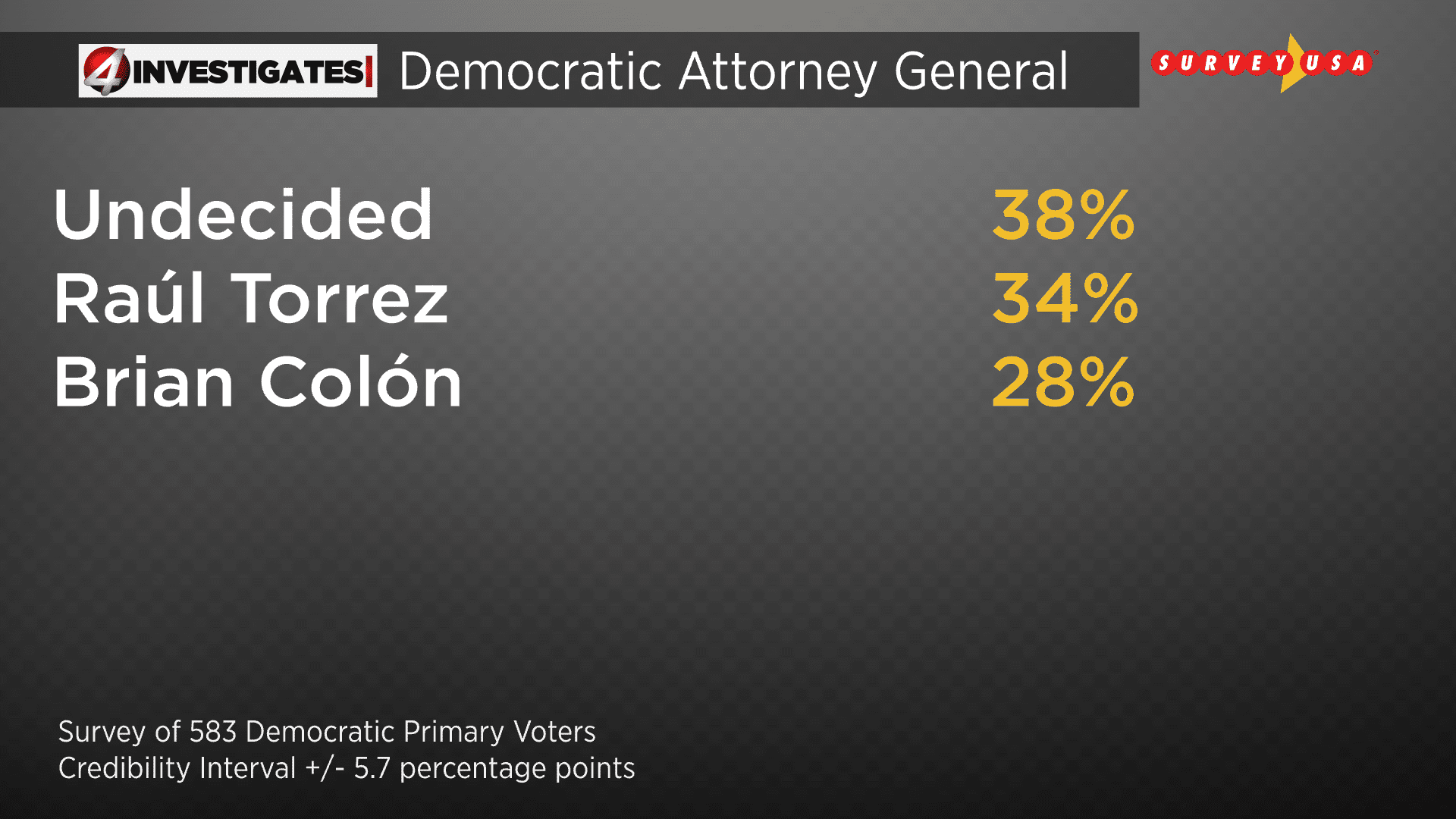 Krebs warned that profile can cut both ways.

Torrez unsuccessfully advocated at the Legislature this year for tighter pretrial release rules for people accused of certain violent crimes. He had the support of the governor for a series of crimes for which there would be a “rebuttable presumption” of danger to the community – meaning they’d be more likely to stay in jail until trial. Gov. Michelle Lujan Grisham has not endorsed either man so far.

While legislators took a more dim view of the idea, raising constitutional issues that ultimately killed the proposed changes, the KOB 4/Survey USA poll showed broad support for the idea: 71% of people surveyed said it should be more difficult for people charged with violent felonies to be free until their trial. Just 8% said New Mexico’s system of pretrial release needed no changes. Those statewide numbers were roughly the same for Bernalillo County, where there are additional rules in place to ensure defendants don’t languish in jail prior to conviction.

That general support of law enforcement flipped when it came to use of force by police during arrests. In the poll, 60% of people were either somewhat or very concerned about how police treat the people they arrest. That concern ran across the urban-rural divide that separates many political opinions, including in suburban areas like Rio Rancho and Corrales. Even 43% of self-identified conservatives were worried about use of force during arrests.

Overall, the poll showed 57% of New Mexicans felt confident their local police department could keep them safe. That confidence wanted in urban areas, where 47% of those surveyed had little or no confidence in their police department’s performance. White survey respondents were more likely than non-whites to say they felt safe, 63-54%.

In another question about whether people felt safe in their daily lives, just 27% said they did not. Political divides were evident when voters separated themselves by 2020 presidential vote. Supporters of former President Donald Trump felt unsafe at nearly double the rate – 36% – of those who voted for Joe Biden – 19%.