ALBUQUERQUE, N.M. – It’s been 21 years since Sept. 11 would forever become a day of pain, remembrance and patriotism. New Mexico first responders across the state paid tribute to the thousands who lost their lives that day.

“Myself personally I’ve been doing this for the last several years, I can’t actually count how many, but this has been going on since 2003,” said AFR Lt. Tom Ruiz.

Many now were not even alive when during the terror attack but they believe keeping ceremonial traditions like the stair climb and others is crucial in teaching the younger generation about what happened that day and immediately after. 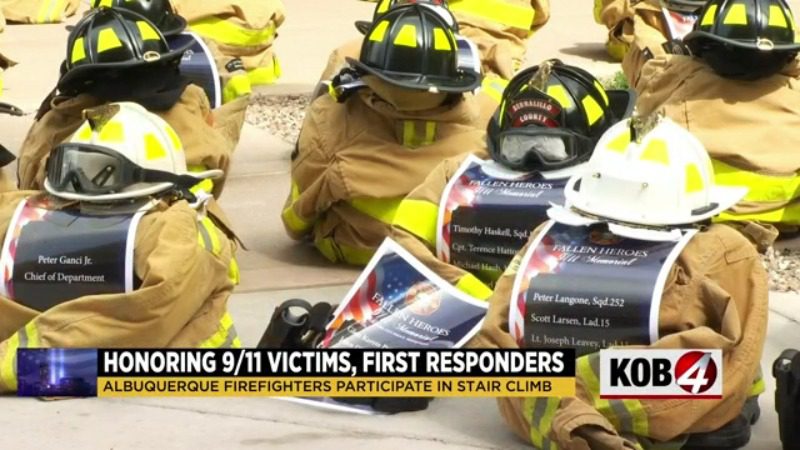 At just 13-years-old, Lorenzo Vargas has made his own traditions in honoring the 9/11 victims.

“When we were at my grandpa’s house, we would watch the documentaries. About 9/11 so when those were on, all these brave men and women just running into the tower just inspired something, sparked something,” said Vargas.

He’s too young to participate in the stair climb, so he got creative.

A bell was promptly rung at the top of each hour while guard members stood watch over the memorial for 343-minutes- one minute for each firefighter killed on 9/11.

“’For me as a firefighter, something like this is incredibly impactful because we live and breathe with our brothers and sisters in fire. We effectively live a third of our lives together and when a tragedy like this happens and we are no longer able to be next to that person, it really strikes close to home,” said BCFD Engineer and Production Coordinator Janessa Ruyz.