“Today, the unborn are the winners, and RPNM welcomes the historic decision by the Supreme Court on moral, religious and political grounds. RPNM commends the justices in their recognition that the measure of a person or society is how they protect the vulnerable – those with the least voice.”

“Today, the US Supreme Court issued a decision overturning nearly 50 years of legal protections established in Roe vs. Wade, destroying every American’s right to access safe and legal abortions. This catastrophic decision will cost lives by eliminating critical health care and rob women of their constitutional right to privacy and ability to make personal decisions about their bodies, health, and family. Although abortion access remains protected in New Mexico, in other states women and doctors will now face punishment, imprisonment, public interference, and violence for seeking out reproductive health care. 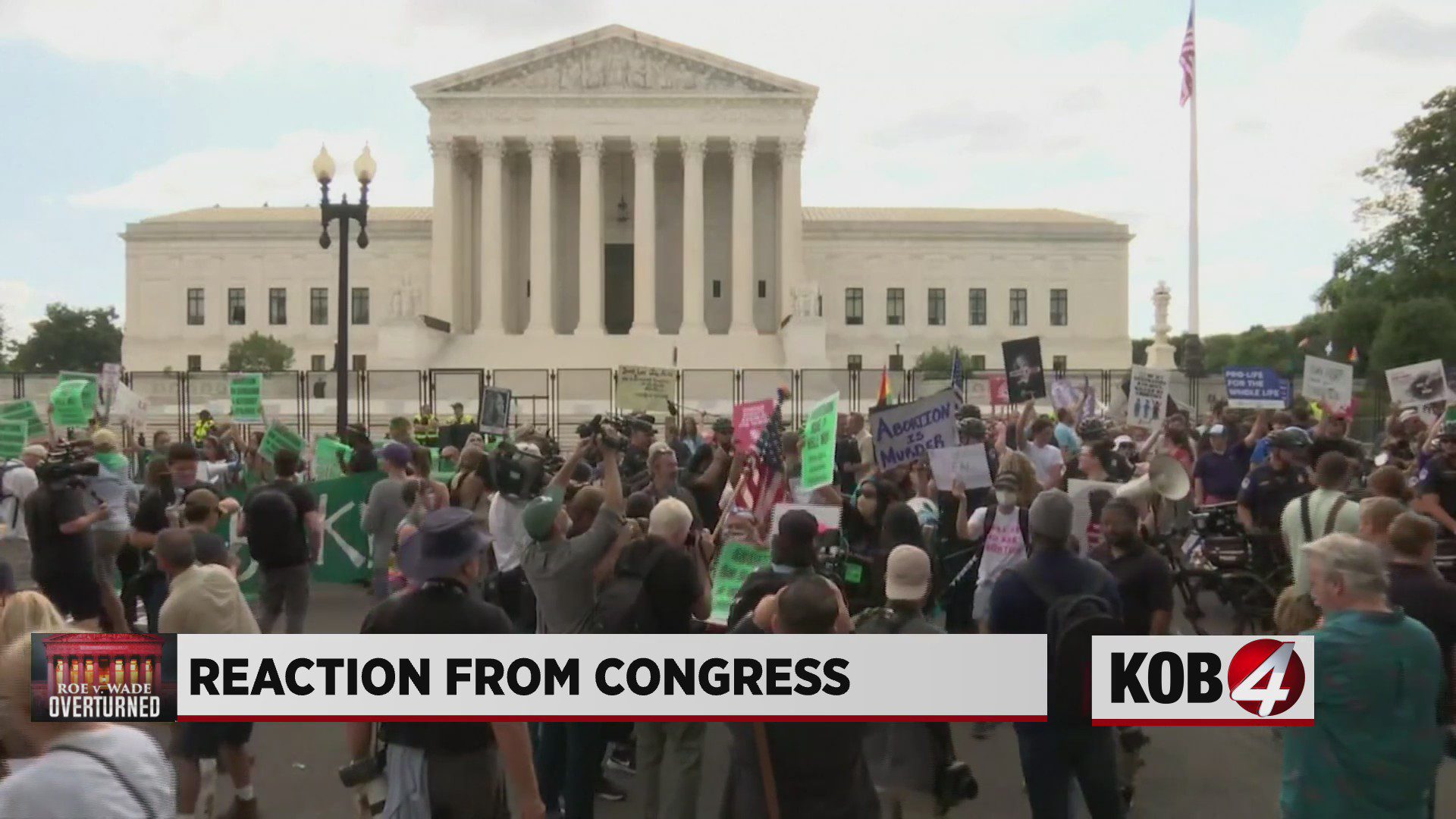 The fundamental right to one’s own reproductive health is a core tenet of the Democratic Party of New Mexico’s platform and we will never stop fighting to protect every American’s right to make their own healthcare decisions. The only reason abortion access in New Mexico remains protected is because of the actions taken by Governor Michelle Lujan Grisham and Democratic leaders in our state legislature. But to keep these protections in place here in New Mexico, we must continue to elect Democrats up and down the ballot.”

“The moment we have long dreaded has arrived, and our nation will be the worse for it. With this ruling, the Supreme Court has unilaterally thrown out 50 years of judicial precedent and subverted the will of millions of Americans who believe in a woman’s right to make her own decisions about her body.

This opinion is the culmination of decades of careful, sinister planning by hyper-partisan, archconservative Republican leaders in D.C. For years, they have pushed for cruel restrictions on women at every turn – inhibiting access to contraceptives and forcing them to endure torture during the simple act of walking into an abortion clinic. Let’s be clear – this decision not only affects a woman’s right to choose, but also a woman’s right and ability to seek medically-necessary health care.

This ruling will destroy both lives and livelihoods. Make no mistake: this is a war on women. The effort is not to protect life but to diminish it, to control women and relegate them as second-class citizens.

In anticipation of this very moment, we took action. We eliminated New Mexico’s antiquated trigger ban on abortion, safeguarding the right of every woman in this state to make critical decisions about their own health and to decide for themselves – and their families – when to have children. As the laws in this country change before our very eyes, I will continue to fight for the right to a safe, legal abortion in New Mexico and stand as a brick wall against those who seek to punish women and their doctors just because they seek the care they need and deserve.”

“With this decision, the Supreme Court has disregarded nearly five decades of precedent, undermining the Constitutional and human rights of individuals to control their own bodies and destinies and to access critical care. This extreme and dangerous decision will prevent people across the country from getting the medical care they need and sets the clock back decades on human rights and gender equality. The U.S. Senate must immediately take up the Woman’s Health Protection Act, which I cosponsored in the House, to codify Roe v. Wade in statute—and if necessary break the filibuster to pass this urgent legislation.

“I want to be clear, access to abortion remains legal and available in New Mexico—and those in need of care should consult with a health care provider.  I will be working with my colleagues in Congress, our health care providers, and our communities to support our reproductive care system, which has been so heavily impacted and strained by the decisions of surrounding states.

While I am outraged by this decision, I believe we must turn our anger into action. New Mexico offers a clear path forward for the country. To protect access to care, New Mexicans organized in 2021 to pass a bill to overturn an antiquated abortion ban, which I was proud to vote for in the State Legislature. Now, it’s up to us to do the same nationwide and ensure we elect a pro-choice Congress that will stand with the majority of Americans and the millions who will be impacted by this decision.”

“Today, the Supreme Court has finally returned the question of abortion to the 50 states and restored the democratic right of Americans to defend the unborn. Now, it is our responsibility to build a society where every mother and her child are protected, supported, and loved.”

“In New Mexico, we trust women to make personal decisions about pregnancy with their familias, their faith, and their healthcare provider – without government interference. Today’s Supreme Court decision is wrong and dangerous. It is a rollback of freedom that takes away half a century of the rights of women across our nation. The consequences will jeopardize the health and safety of our families while unjustly criminalizing women and medical providers. I voted to pass laws to protect access, and will always be an advocate for a woman’s right to healthcare.”

“Today’s decision by the conservative majority on the Supreme Court has shamefully taken our country backward – undermining nearly 50 years of legal precedent and putting the most vulnerable at risk by rolling back women’s reproductive rights. This decision shows how out-of-touch extremist conservative justices and politicians are with the American people who overwhelmingly support Roe.

The consequences of this decision represent a dangerous attack on women’s health care and an attack on freedom and privacy that will empower judges and politicians to overrule the private health decisions made by a woman and her doctor.

New Mexican women should know this dangerous decision will not go unchallenged and that safe abortions are still legal in New Mexico. I’m committed to protecting a woman’s right to choose and this fight is far from over. Senate Democrats must be willing to use every tool at our disposal – including abolishing the filibuster – to ensure the right to an abortion is once again protected by law.”

Like the overwhelming majority of the American people, I believe that a woman has a right to make her own health care decisions without the government getting between her and her medical providers. But with today’s decision, and as MAGA state legislatures across the country continue passing stricter abortion laws, we enter dangerous territory that could put some women who seek an abortion behind bars.

“Republicans in the Senate continue to block debate on legislation to codify reproductive rights, but they can’t block the will of the American people. The Senate must act at once to protect the constitutional rights of every woman across the nation.”

During a press conference shortly after the decision was announced, Sen. Heinrich commented further on the decision, saying:

“You know, my reaction is, this is a very radical court that is very disconnected with the American public and I fear that you’re going to see even more very strident decisions out of this court — and I don’t think that this is an area where, when you’re dealing with fundamental constitutional rights, that really is in the purview of the courts. My hope is that, at some point, we can legislatively restore those rights but that would take a majority that we simply don’t have right now.”