ALBUQUERQUE, N.M. — A U.S. Forest Service review says the agency used outmoded modeling and didn’t account for a myriad of troubling factors in April before starting a prescribed burn that blew up into the largest wildfire in New Mexico history.

Released Tuesday, the Gallinas-Las Dispensas review details the procedures and plans leading up to the fire, which was started April 6 by Forest Service burn crews west of Las Vegas.

The agency claims most procedures were followed but that those directions were based on methods and models that didn’t fully account for prolonged drought, steep terrain, unpredictable winds, potentially explosive fire growth and a host of other complexities.

Democratic Congresswoman Teresa Leger Fernández called the report “incredibly disturbing” and noted crews on the ground told reviewers they felt pressured to complete the burn despite conditions that showed it was a bad idea.

“Forest Service failures destroyed many rich and proud New Mexico communities. The rains may cause a second flood disaster,” the congresswoman said. Widespread rains and potential flooding over the burn scars are predicted for Tuesday. 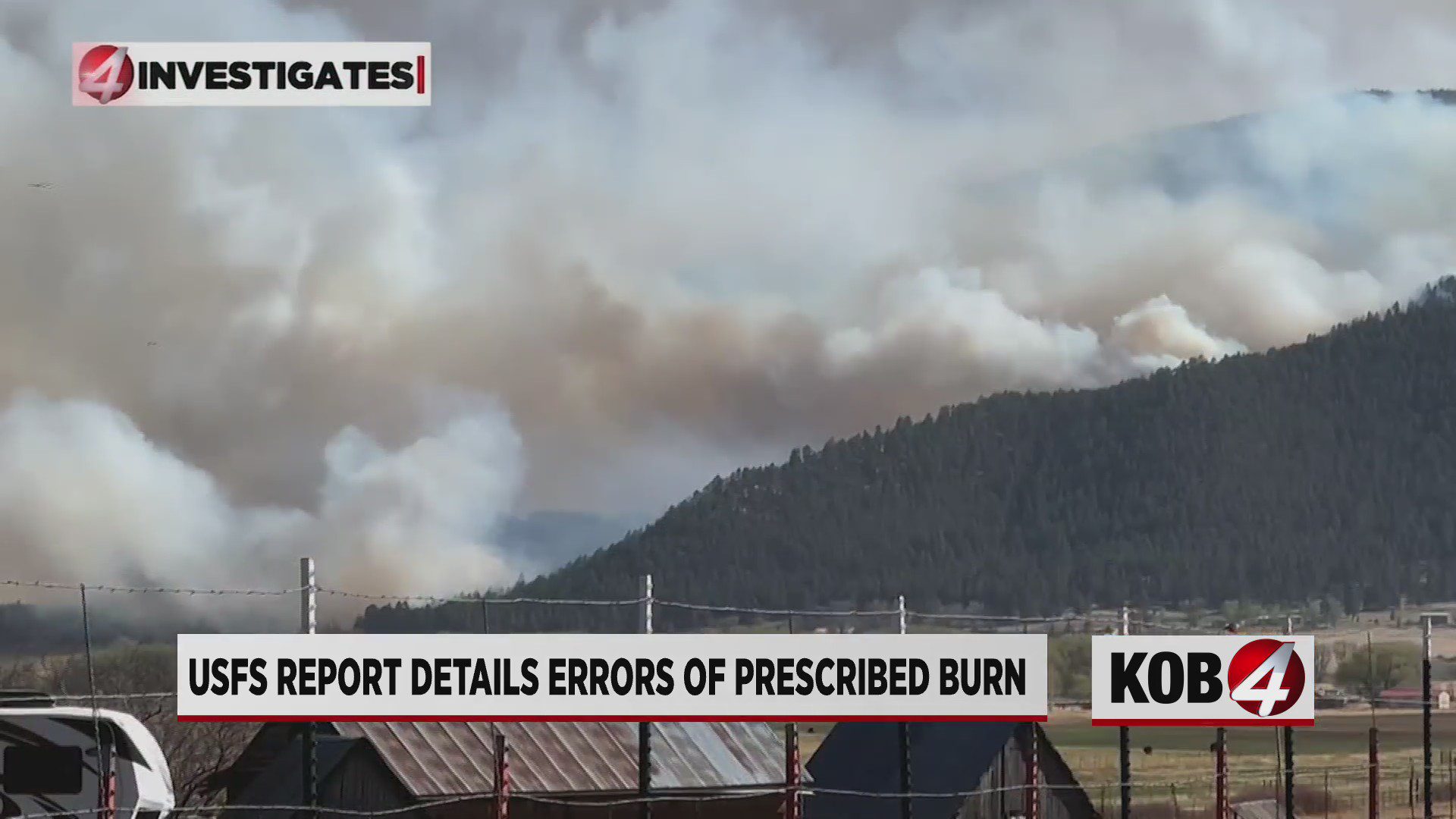 The U.S. Forest Service was not able to provide an interview Tuesday, but shared the following statement with KOB 4:

“While we’re not able to provide an interview today, we can share that the Forest Service takes its role seriously to respond to and prevent wildfires with the safety of the communities involved and firefighters as our primary goal. The devastation caused by Las Dispenses escaped prescribed fire in New Mexico is tragic and causes enormous grief within the agency, demanding a national-level review to understand how these events unfolded and prevent this from happening in the future.

The Forest Service completed a review of the Las Dispenses escaped prescribed fire, which will inform efforts to improve the agency’s prescribed fire program and any associated safety-related issues. The review, available on Wildland Fire Lessons Learned Center website, includes an analysis of the conditions on the ground, the planning process and design, an assessment of the decisions leading up to the prescribed fire implementation, a summary of contributing factors, and key findings, lessons learned and recommendations.

Wildfire mitigation, wildfire fighting, and other land management work we perform are inherently dangerous. When that work does not go as planned, it is imperative that we learn from those experiences. And we do.

On May 20, Forest Service Chief Randy Moore made the decision to temporarily cease all prescribed burning as an immediate safety precaution to ensure we understand what happened so that we can continue to improve our agency’s safety protocols around prescribed fires. Our goal is to do what we can to ensure the health and safety of communities and wildland firefighters in the future.”

“I am deeply frustrated by the numerous missteps within the Las Dispensas burn identified by this review. It is very difficult to understand how a plan crafted several years ago could be repeatedly re-approved without adjustments or considerations for updated drought conditions, as well as how that plan could be put into place without any immediate data for weather conditions during what New Mexicans know to be a particularly windy time of the year. In addition, it does not appear that anyone involved in this burn was held to account for the significant mistakes made during this burn.

It is critical that moving forward, the U.S. Forest Service takes every identified opportunity to ensure forest management activities do not result in the devastation of hundreds of thousands of acres and dozens of New Mexico communities. I will continue working to hold the federal government accountable for making New Mexicans whole after the extreme hardship caused by the Forest Service’s negligence.”

“This review is incredibly disturbing as it lists multiple errors in the calculations that went into the prescribed burn that eventually upended the lives of thousands of New Mexicans. Forest Service failures destroyed many rich and proud New Mexico communities. The rains may cause a second flood disaster. As the report notes, the Forest Service did not place  a high value on the numerous homes, communities, lives, historic sites, and watersheds at risk.  We know, and the report concludes as well, that these sites deserved the highest valuation,  and therefore greatest protection from risk.

The cavalier attitude to the complexities of fire behavior and the likelihood of escape from the perimeters is shocking. The prescribed burn analysis not only undervalued what was at risk, it underestimated the impact of the extended drought on the likelihood the fire would escape the perimeters, and it did not update the analysis with the latest conditions on the ground.

The USFS did not have adequate personnel available to mitigate an escape, nor did they have the water that their own analysis indicated would be necessary to suppress a wildfire. I am especially concerned that the personnel felt pressured to “accomplish the mission” which may have contributed to the push to burn.

It makes no sense to move forward with a prescribed burn in 2022 based on prescribed burn policies from 2007 and it is unbelievably irresponsible to start a fire without verifying the fuels and conditions on the ground.  If the Forest Service claims that it followed all of its prescribed burn processes, clearly those processes are dangerous and negligent.

This review underscores the need for an independent investigation of the Forest Service’s prescribed burn policies that I have called for. This can never happen again.  We cannot rebuild the trust of our beloved communities and productively work to protect our forests without accountability.  Lastly, I will continue to champion my legislation to fully compensate those affected by the Hermit’s Peak/Calf Canyon Wildfire.

Prescribed burns play an important role in forest management. But, this tragedy was avoidable, and the Forest Service should indefinitely suspend prescribed burns until it has fixed the glaring issues described in its report.”