But a portion of that road was shut down just as soon as it opened up. Phase 1 construction started in July 2020 running from Coors and Tower to Bridge just west of Goff.

“The work is beautiful,” said a woman who lives on Cortez, the neighboring street to the Bridge reconstruction.

“They did a really nice job of fixing that area,” said long-time resident Joe Chavez. “It looks nice it makes Bridge Street upgraded.”

People in the South Valley neighborhood near Bridge and Old Coors agree, an update is long overdue. There is just one problem. 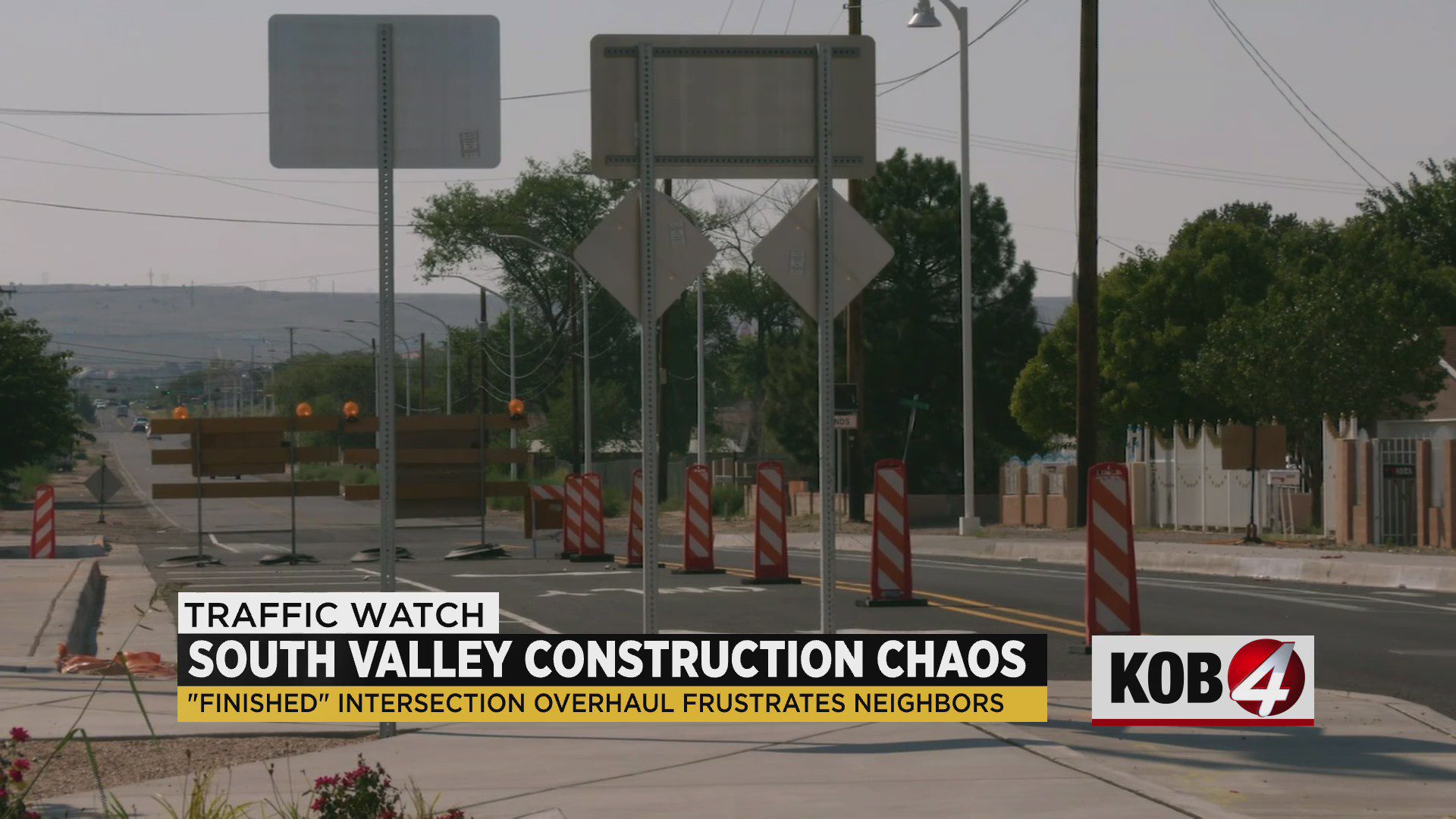 “They just have to fix that little flaw right there,” said Chavez pointing to a newly designed turn lane directed eastbound traffic on Bridge to his residential street.

“They put the barriers there so we’re almost back to square one,” said Gerard Garcia, another long-time area resident.

The “finished” design where Bridge, Tower and Old Coors come together isn’t sitting well with neighbors or drivers.

Eastbound Bridge dead ends, but the arrows meant to point neighborhood traffic onto a small side street were sending everything — trucks, trailers, even the occasional semi — streaming into the neighborhood.

“The traffic was following what the arrows were telling them to do,” said Liz Baca, an area resident.

“At the ribbon cutting is when they brought those concerns up,” said Jason Clark, Bernalillo County construction manager.

To be fair, county officials said they didn’t give the traffic pattern much of a chance. At the ribbon cutting the cut-to-tower road was closed. That meant all direct was forced onto Cortez Street.

Bernalillo County officials said closing off access to this stretch is part of the short-term solution, but it could also be part of the long-term solution if that’s what this community members in this area want.

That section is Phase 1 of a much larger Bridge Reconstruction Project. With the help of state and federal dollars, construction for this section was $20.1 million. The design cost was an added $1.5 million.

“We would have like a little bit more input,” said Garcia, a resident in the area.

He said that this design was always the plan. But because the project has been in the works for more than a decade the meetings were held four to five years before construction even started.

“This was unusual circumstances, like I said, a lot of different changes, a lot of turnover internally. We just tried to keep it moving forward as best we could,” said Clark.

Clark said now they’re reacting as best they can. Despite the not-so-appealing look, the road closure is exactly what some neighbors want.

“We are so happy they did what they did and they did it quickly which we are very, very happy that they did that,” said Baca.

“We would actually like to have it closed off,” said another resident.

While the closure is the plan for now, county officials said the goal is to get drivers used to the cut-to-Tower traffic pattern.

GPS has the new pattern down. The idea is to make Tower a faster option for through traffic and make life for people who live along Bridge quieter and safer.

“When it was planned, it was more for the traffic of the neighborhood,” said Larry Gallegos Communication Services Specialist with Bernalillo County.

If drivers get the hang of it the neighborhood turn lane could reopen.

“We want to be good stewards of tax payer money and make sure we do a good job. This, like I said, is just traffic behavior,” said Clark. They got to learn the new route. Right now, safety is paramount. So that’s why we’re doing it.

Either it works or the county could start looking for a permanent fix to a problem that started more than a decade ago as part of a $20 million solution.