North Valley neighborhood on the lookout for potential peacock predator

ALBUQUERQUE, N.M. – People in the North Valley believe there is a potential predatory peacock poacher, and some believe they spotted the thief.

First off, peacocks are a way of life in this particular North Valley neighborhood. Neighbors say a few birds multiplied to several dozen over the years. They’re wild – no rhyme or reason where they came from, but lately some of them have disappeared.

Deb Gallant and Fred Miller have lived in the same North Valley home for 31 years, and in that time they’ve had dozens of wild house guests.

And the birds have really grown to like their home. 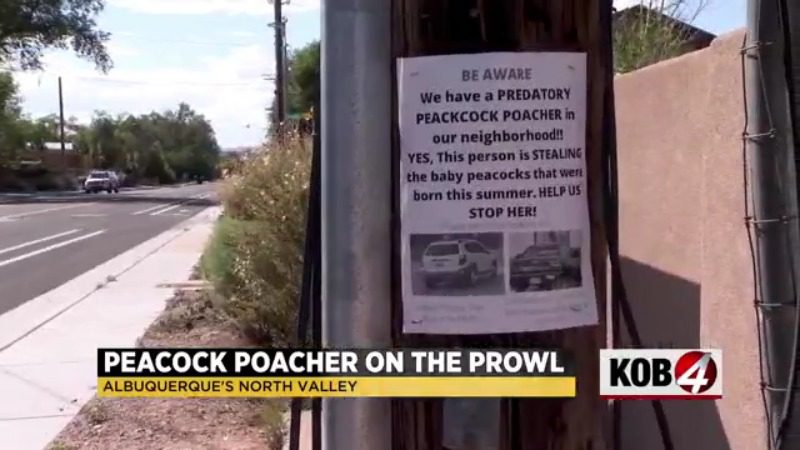 “In the spring they do a mating thing here on our porch so we have to – Fred shovels a lot of peacock poop,” said Gallant. “They use our roof as a take-off like a you know launch pad and that’s their landing, and in the morning they come and they hit our roof you know about seven o’clock. ‘Boom boom boom boom.'”

“They’re not violent, never had any one of them come and come after us, they’re just really sweet little animals and they’re nice to watch,” said Gallant.

Apparently someone outside the neighborhood has come to love them too. Fliers are now posted around the area, telling people to be on the lookout for predatory poachers.

But they also don’t want greed to wipe them out.

Gallant says the neighborhood has made room for them, and drivers respect the birds.

“They come and go as they please. They do what they wanna do,” said Gallant.

It is illegal to keep a wild animal as a pet in New Mexico.

So, if this alleged thief is keeping the birds at their home, they could face some serious fines.