FARMINGTON, N.M. – As the weather heats up, a lot of people like to cool off at the lake, but out on the water sometimes people can find themselves in sticky situations that require help. And that can pose a challenge for rescuers to get to those locations without a boat.

San Juan County is home to the second-largest lake in the state, Navajo Lake, and for rescuers like Kevin Jones, the Division Chief with San Juan Fire and Rescue, it was important for the county to be able to respond to emergencies on the water.

“We would always get calls out at Navajo Lake and the only access to boats we had were either private citizens or usually we were using park service boats,” Jones said.

However, park ranger boats are not built for the variety of emergencies the county responds to, “heart attacks, strokes, broken bones, and people dining off a cliff and getting injuries associated with that. We have the wonderful fishhook in the finger sort of thing too, also boats overturned boats, sinking with people on board, we had fires out here, we had houseboats catch on fire,” Jones added.

So in 2013 San Juan County acquired the fire rescue boat, equipped with unique features to provide emergency services on the water, and of course, no fireboat is complete without the ability to put out fires. 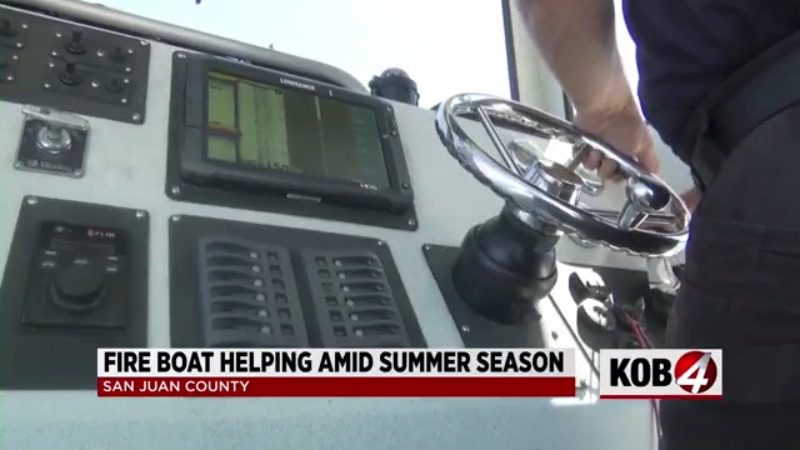 “It has a 1,000 gallon per minute pump on it that it’s capable of pumping water, and of course it just uses the lake water, so endless supply, so we can shoot water with the deck gun that’s right here behind me or we can run hoses,” Jones said.

And because other New Mexico lakes are experiencing low water levels, Jones added that there is an increase in the number of visitors to Navajo Lake, making this boat even more of a lifesaving resource.