ALBUQUERQUE, N.M. – It’s been one year since a hot air balloon crash-landed in a median, killing five New Mexicans, and their families say they’re still feeling the loss of their loved ones.

“They did nothing but good things. So losing both of them was really a sad, sad day for us on Earth,” said Shannon Ray-Mitchell, Susan Montoya’s daughter.

Montoya and her husband, John Montoya, were two of the five onboard the balloon that hit power lines severing the gondola from the envelope – which could be seen hauntingly floating on its own.

Ray-Mitchell says Susan and John were so adventurous, they were planning a bucket list trip to Ireland this year for their anniversary. That milestone among others are forever changed in their absence,  including Susan’s birthday earlier this month. 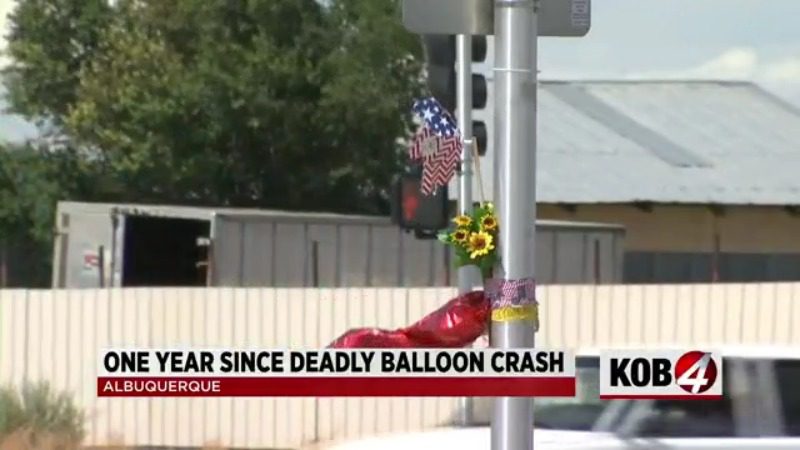 “It was just a reminder that she’s not here. Yeah, so it was hard. It was hard for our kids. You know, they were great-grandparents. They came every year super, super active in our kid’s life, you know?” said Ray-Mitchell.

Martin and Mary Martinez and the pilot Nick Meleski were also killed in the crash.

Toxicology reports later came back showing Meleski had traces of marijuana and cocaine in his system at the time. It’s still unclear when he ingested those drugs in relation to the fatal flight.

Because of the findings from the Federal Aviation Administration – a wrongful death lawsuit was filed on behalf of Martin Martinez’s family against Meleski and the company he flew for Hot Air Balloonatics.

As of right now, the FAA still does not require a medical certificate to pilot hot air balloons.

And while the memorial has disappeared, the loss has not.

“It just seems like they were ripped from us. You know, right when my mom and John should have been able to start living their life,” said Ray-Mitchell.

The National Transportation Safety Board says the crash is still under investigation, but they expect a factual report to come out later this year. They added that these types of investigations usually last 12 to 24 months.