To watch the full day of testimony, here is part one and part two.

ALBUQUERQUE, N.M. – Six years of waiting, outrage, and disbelief at times began to play out in an Albuquerque courtroom Wednesday.

The pursuit of justice for 10-year-old Victoria Martens has had twist after turn, with all three suspects in her death laying the blame on each other.

On Wednesday, two of them came face to face – Fabian Gonzales at the defense table and Jessica Kelley on the stand.

“I’m not going to lie to you, this is a complicated case,” said the prosecution. 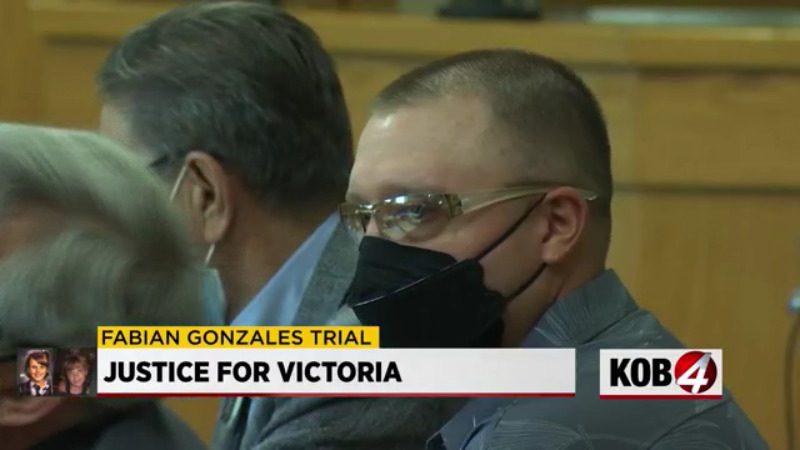 This is potentially the only time a jury will decide the fate of any of the suspects. Both Kelley and Victoria’s mother, Michelle Martens, took plea deals.

But Wednesday brought plenty of action in Gonzales’ trial with opening statements and the beginning of Kelley’s testimony.

Kelley’s testimony came sooner than expected for many who have followed the trial over the years. Both sides mentioned Kelley a lot in their opening statements, with the defense even claiming they’ll prove she was the one who killed Victoria.

The long-awaited trial of Gonzales, the last of three known suspects in Victoria’s murder, is off and running.

“This defendant did not personally strangle Victoria, but he created the danger that led to her death, and he didn’t hesitate to tamper with the evidence of her murder,” said the prosecution.

The state claims Gonzales indirectly caused Victoria’s death, by putting her in danger in three ways:

One, letting his cousin Kelley stay in the apartment where the child lived.

Two, leaving Victoria alone with Kelley when he knew Kelley was in a paranoid state, high on meth.

And three, keeping Victoria’s mom Michelle away from her the day she was murdered.

“The defendant created a danger that resulted in Victoria’s death and he cleaned up the crime scene to cover up his responsibility for her murder,” said the prosecution.

Gonzales’ attorney didn’t take long to point the finger at Kelley, saying she’s the one who should be held responsible for Victoria’s death.

‘It wasn’t somebody who killed her as the prosecution said—it’s not a he, but a she. Jessica Kelley killed Victoria and their star witness entered into a plea agreement where they dropped the murder against her,” said the defense.

The defense recounted cell phone data that proves Gonzales nor Michelle were at the northwest Albuquerque apartment when Victoria was killed.

He also poked holes in Kelley’s claim that a fourth suspect, an unknown man, came to the apartment and killed Victoria.

The first to take the stand were first responders dispatched to the apartment in August 2016.

And just before the end of day one, Kelley took the stand.

She took a plea deal and was sentenced to 44 years in prison in April and her testimony against Gonzales was part of that agreement.

She got emotional as she talked about it:

“Why is it hard to testify against your cousin?”

Kelley: “It’s because I grew up with him, I love him.”

“Was there anyone in your life that sort of encouraged you to testify today?”

“And what did they tell you to do?”

Kelley: “To do the right thing.”

The trial resumes Tuesday, with more from Kelley, including more about that night in August 2016, and her theory on the fourth unknown man she claims was the one who killed Victoria.

Gonzales is not accused of murdering Victoria, he’s charged with child abuse and tampering with evidence.

All three suspects were originally charged with murder, but they’ve been dropped over the years.