KOB 4 looked into enrollment numbers and found out it’s because of the “Opportunity Scholarship.”

“I really love it I mean I’m on the Opportunity Scholarship I really love that as a New Mexico resident I have the opportunity to go to school for free,” said Lili Kaneshiro, a UNM student.

Kaneshiro is now less worried about how she’s going to cover the costs of nursing school. 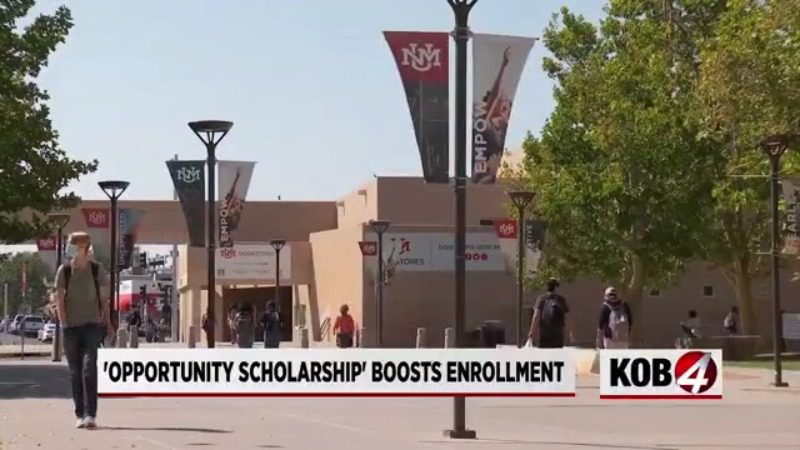 “Across the UNM campuses over 11,000 students new and continuing have benefitted from the Opportunity Scholarship,” said Garcia.

“Overall total enrollment is up a little over 1.5% so we’re really happy about that,” said Garcia.

The Rio Grande Rivalry is going to grow even more as New Mexico State University grows its enrollment too.

Scott said NMSU has seen increases in enrollment too.

“So the 2.6% increase on main campus represents a 3.2% increase in our undergraduate students, which brings in one of the largest freshman class we’ve had since 2009, and that level of excitement on campus, it’s just good for everybody,” she said.

Garcia said the impact the Opportunity Scholarship is making is becoming evident.

“We are absolutely convinced that the opportunity scholarship made the difference for so many new and continuing students to pursue their education,” he said.

Scott said the ripple effect will most likely be seen soon as well.

“That frees up money for them to use the Pell grant from the federal government to help with living expenses. And that means they can work a little bit less and focus more on their studies,” she said.

These are only preliminary numbers from each university, but the New Mexico Higher Education Department said a full report on enrollment can be expected sometime next month.