Owners struggle to get dogs, thousands of dollars from local trainer

ALBUQUERQUE, N.M. – At least two local families are out thousands of dollars to a dog trainer they thought would work miracles for their pets.

Giuli Frendak pieces together what really happened during months of alleged training, and shares those families’ fight to get their pets back.

Goose is the light of the Staben family, but they knew their big ball of love needed some serious training.

“Loves love, loves everybody, everything,” said Sarah Staben. “He marks, he tears up everything, he screams like it’s a bark but more like a yodel. He’s excited about everything, horrible on a leash, but the sweetest dog you’ve ever met in your life.”

Staben searched for local dog trainers and came across Duke City Dog Academy in Albuquerque, and the owner – Rene. 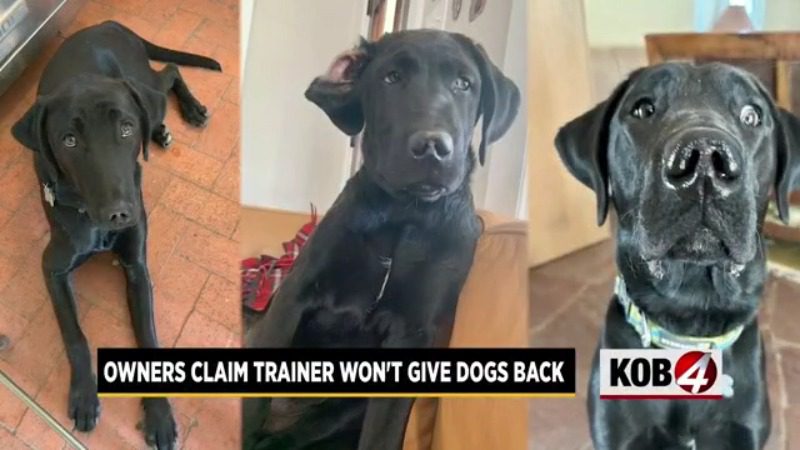 “The first call I had with her, she said she was getting off a session working with the police dogs for the Albuquerque Police Department, and I thought well, if she can train a police dog, surely she can train my ridiculous lab,” said Staben. “The initial stage was a $1,200 deposit and then $1,600 for a total of $2,800 for five weeks of dog training.”

Rene took Goose for five weeks of training on Nov. 8. Her assistant texted the Stabens almost immediately with updates about Goose’s progress, but no pictures or videos at first.

And when the pictures finally did come:

“I couldn’t tell where he was, he had a leash around his neck and he was looking back at the camera with his ears slicked back which is not usual for him, and he looked thin in the picture,” Staben said.

Text messages show Rene’s assistant, Amber, said her boss “usually doesn’t like to send them home the same week as Christmas as it’s hard on the families to manage.”

Then explained their office would be closed until Jan. 2 for the holidays. But assured the family training would continue during that time.

“January second came around when they were supposed to be back in office and I said ‘hey Amber I’d love a go-home-date today, and I’d love a phone call with Rene,” said Staben.

She says that phone call never happened, and still no go-home-date.

After a week of failed attempts, Staben turned to the biggest pet group she could find on Facebook, asking if anyone had experience with Duke City Dog Academy.

“One of the first comments was ‘Lisa Berry is bad news you need to get your dog back immediately,’” Staben said. “Who the hell is Lisa Berry? I gave my dog to a woman named Rene.”

Others online said the Stabens should check out Luv N Care Boarding and Grooming in Albuquerque – a kennel connected to the mysterious Lisa Berry.

“Kennel is putting it generously. It is a rundown duplex with a stop sign in front with bullet holes and bars on the windows,” Staben said.

The couple spotted Goose right away.

“At least a dozen dogs in there, in horrible conditions, in cages, no roofing of any kind, protection from the elements, s*** just everywhere,” said Staben

There was no answer at the business’s door, and still no response from Rene or her assistant.

The Staben’s filed reports with Albuquerque Animal Welfare and the police department. Under New Mexico law, dogs are considered property and without a warrant, Animal Welfare officers’ hands were tied.

“She lied to me about where my dog was, when it was coming home, what her identity was, what she was doing with my dog, her location,” said Staben.

We went to the business to check for ourselves.

“Closed sign, but we’ll try it, and this is regular business hours, it says they should be open– it’s 3:45.”

And that’s when we met Jonathan Steinberg.

“I just came back to see if I could hear my dogs– and I swear I hear one of them in here right now,” said Steinberg.

Steinberg is in the same position as the Staben’s. He handed over his two Labs, Duncan and Cooper, to Rene a week after Goose went to training.

KOB 4 was there as animal control officers checked the property for the second time in as many days. But with no permission to enter the property, they left a signed complaint on the door against Lisa Berry.

Court records show she has a bench warrant for not showing up to court for an uncleanliness of property and intact animal charges in October. She faced misdemeanor animal abuse charges in Valencia County in 2018 connected to videos of dogs attacking and killing rats.

A quick Google search pulls up her past businesses, including Custom K-9 Performance with reviews saying:

“She claims to be a “trainer” but holds dogs captive there. None of her business lines work because she’s a fraudster.”

“Had my dog for two months’ residential training. Lost 20 pounds, about 20% of his weight.”

“Money making scheme where they “pretend” to train your dog. DISGUSTING!! Not a doubt in my mind that Duke City is neglecting animals under the guise of training.”

A day after our visit to the property, and requests for information through the Animal Welfare Department, officers got permission to enter the property – they found 35 dogs, including Goose.

Officers returned him to the Staben’s more than 20 pounds lighter, covered in feces, with visible abrasions on his mouth.

Steinberg was mistaken the day he thought he saw his dog at the kennel. It turns out neither Cooper or Duncan were at the property.

However, a man he never met returned his dogs Sunday night, both of them visibly skinnier, and one of them had multiple abrasions on his mouth and paws.

On Sunday, we finally got a hold of Lisa Berry on the phone. She said she “had to leave town suddenly” because of a family emergency last week.

Before that, she said she had a bad case of the flu in December, so she put some dogs at the “fully staffed” Luv N Care Boarding Kennel where workers were supposed to care for them.

She saw Goose’s condition when officers returned him to his family. She claims he lost the weight over the few weeks when she was sick and then dealing with the family emergency.

She says it happened while she left the dogs in someone else’s care who she mentioned multiple times is “no longer with the business”.

Berry had an active license for Duke City Dog Academy on Thursday. But, on Saturday, the business was conveniently marked as permanently closed.

She said that decision has been in motion since last year, for “a few reasons that have nothing to do with this.”

We’re still waiting on a final report from Animal Welfare about the conditions they found inside the Luv N Care facility late last week.

When asked if Berry trains dogs for the Albuquerque Police Department, a representative says she’s full of it because they send their K-9s out of state for training.