ALBUQUERQUE, N.M. – It was last November when KOB 4 spoke to parents who said they would rather drive out of their way to get their kids to school, than walk across the I-40 pedestrian bridge.

The camps are gone but there is still plenty of nastiness left behind, and parents say they can’t get anyone from the city to clean it up.

“I think they use the bathroom on the bridge, it’s not animal you can tell it’s not animal and you’ll see over there the cup and you know what it is right away. That is where I draw the line for my children’s safety,” said an Albuquerque parent.

Many students who go to the Christine Duncan School on Albuquerque’s Westside have to cross a pedestrian bridge over I-40 multiple times a day.

“We use this as our route to get to school every day and it’s just really dirty and filthy.” 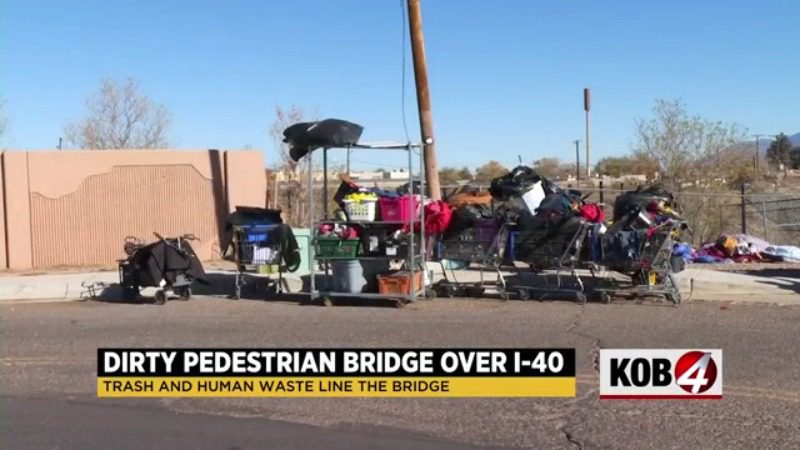 From broken glass, beer cans, and cups filled with urine—these concerned parents are fed up and it’s not only with the mess.

But also with the city’s handling of it.

“I explain what I see I usually put pictures and sometime I will go back and acknowledge if a neighbor has written something I’ll say ‘yeah it’s still there it’s like this and it’s been like this for two weeks now,’” said an Albuquerque parent.

KOB 4 reached out to the City of Albuquerque’s Solid Waste Department and a spokesperson said in a statement:

“Since November 2021, there have been 77 reports made to 311 regarding the area and SWMD has addressed each of those reports by cleaning it up. Family and Community’s outreach team is scheduled to visit the area this week and SWMD crews will clean the area.”

KOB 4 was there back in November 2021 and there are some improvements. But parents say there’s still a long way to go until they will feel safe.

The Solid Waste Department is supposed to be cleaning up the bridge this week.

However, parents say they can only hope it stays clean, but if history is any indication they’ll probably be calling 311 again at some point.