Pecos mayor uses troubled past to inspire others

PECOS, N.M. – Most people who decide to run for public office don’t have a criminal history, if they do, they might try to hide it or downplay it. Others wouldn’t consider running at all because of it.

But you’re about to meet a man who is not only very open about his troubled past, he’s using it to make a difference.

“Everything that’s in here is stuff I’ve collected since I’ve been the mayor. I had a beautiful picture given to me. My mother and I made the cross with the glass stones,” said Mayor of Pecos Ted Benavidez.

Ted Benavidez is now in his second term as the Mayor of Pecos. Benavidez gave KOB 4 a tour of the village office building, where he supervises a small staff. He showed us where they’re collecting donations to help wildfire evacuees.

“This is our food distribution area right now we’ve got some volunteers helping and this food for the people that were displaced,” Benavidez said. 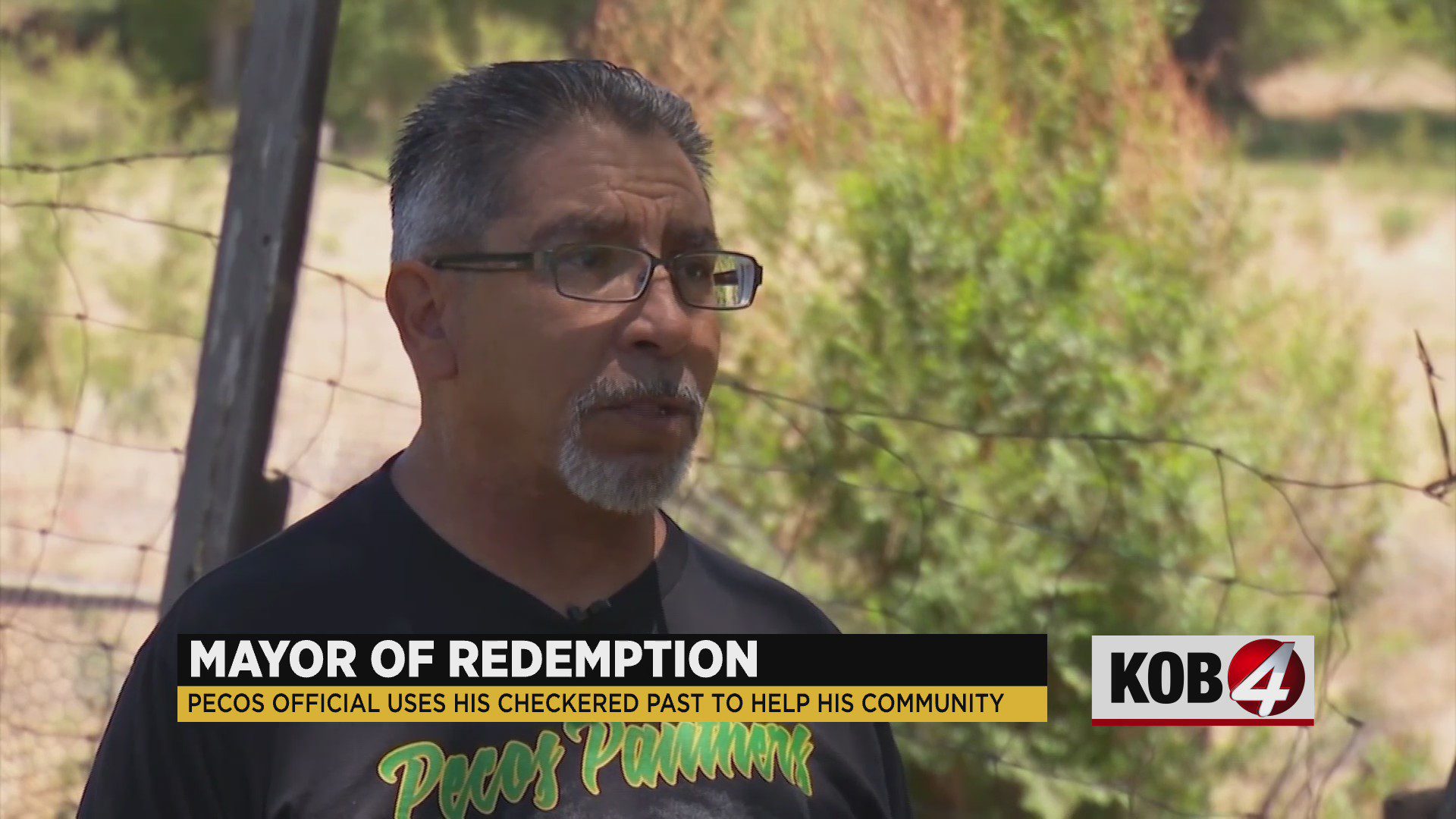 But like so many other communities across New Mexico and the country, Benavidez says Pecos is struggling with a devastating problem that has no easy solution.

“One of the main reasons that I ran for is the drugs in this town. Since I’ve been mayor, we’ve had a lot of people die from overdoses,” said Benavidez.

Benavidez knows the struggle with addiction all too well, he didn’t take the typical path to public office. Benavidez is a recovering drug addict and alcoholic.

“Well everybody knew. Everybody saw me running around town drunk and on drugs and lost and not eating for days and showing up, and I was already an embarrassment. There’s nothing to be embarrassed about right now, I already lived that life,” Benavidez said.

Benavidez was born and raised in Pecos and is one of 13 children. He joined the Marines as a young man, and he moved back to Pecos after his military service. Then his life veered down a bad road.

“I started snorting cocaine, I started selling and then one day, I started doing crack and I got hooked on the crack and that was my drug of choice,” said Benavidez.

Benavidez says his addiction led him to a handful of arrests for DWI. He spent some time in jail and was even homeless at times, until he found the strength to make a change. He credits his mom for supporting him to get sober after he hit rock bottom.

“The rock bottom of my use was waking up at the psychiatric ward of the VA hospital smelling like gasoline, not remembering what I had done to myself. I supposedly put gas on myself and I was trying to light myself on fire,” said Benavidez.

And after his mom passed in 2018, he decided to run for mayor.

“I felt – OK, you were part of this problem, you helped bring this crap into town. So you better help clean it up,” Benavidez said.

He is trying to use his past addiction to help others in the community struggling with theirs.

“Being part of the solution after being part of the problem is what I want to do. People out there know that if you have a problem, or you know somebody that has a problem, if they call me I will go out of my way. If that individual calls and says ‘mayor I’m on drugs can you come visit me real quick’, I will go over there, I’ll go out of my way, I’ll take that person to have a cup of coffee with them. I’m not going to be one that’s going to buy them drugs to get by. If I have to sit there while they go through their withdrawals,” said Benavidez.

He says he’s not just giving, he’s getting.

“And it’s made a big difference in my life because I really feel that I’m accomplishing something. I’m trying to pay back for all the wrong I did and you can’t really take all that back. But just learn from it and if other people can see me and say look at the mayor, ‘you can do it if he can do it.’ I want to be an inspiration to people. I want people to say, ‘look at him, look at what an idiot he was, look at the stuff he was doing. Most people thought he’d be dead by now, but he stopped and he changed his ways,’” the mayor said.

Not only changed his ways, he’s now serving as an example for others to do the same.