ALBUQUERQUE, N.M. – Homeowners in Albuquerque’s Ventana Ranch neighborhood found themselves at the center of a Dr. Seuss tale Saturday morning.

“To see all of our hard work kind of, you know, get destroyed all in a few minutes was as pretty upsetting for all of us,” said Nate Bywater.

Bywater is just one of the residents in a subdivision near Irving and Unser whose holiday light displays were targeted by vandals overnight. Surveillance video camera shows several people running up to homes and smashing decorations on the ground.

“Mostly inflatables, any kind of trees that were upright were taken, smashed to the ground inflatables were popped, cut, ripped out thrown in the street, any other loose decorations that they could get were all thrown out into the street as well and ran over,” he said.

Bywater says the group hit six to seven homes in just a matter of minutes. He says he heard the commotion around 2:00 a.m. Saturday morning but did not see the damage until the next morning. Surveillance video from a woman in a nearby subdivision also shows the vandals aggressively attacking her home around the same time.

Bywater says not all homes in his subdivision were hit. Neighbors believe a group of three teenagers are behind the attacks – each attacking a separate home before quickly driving to a new spot. 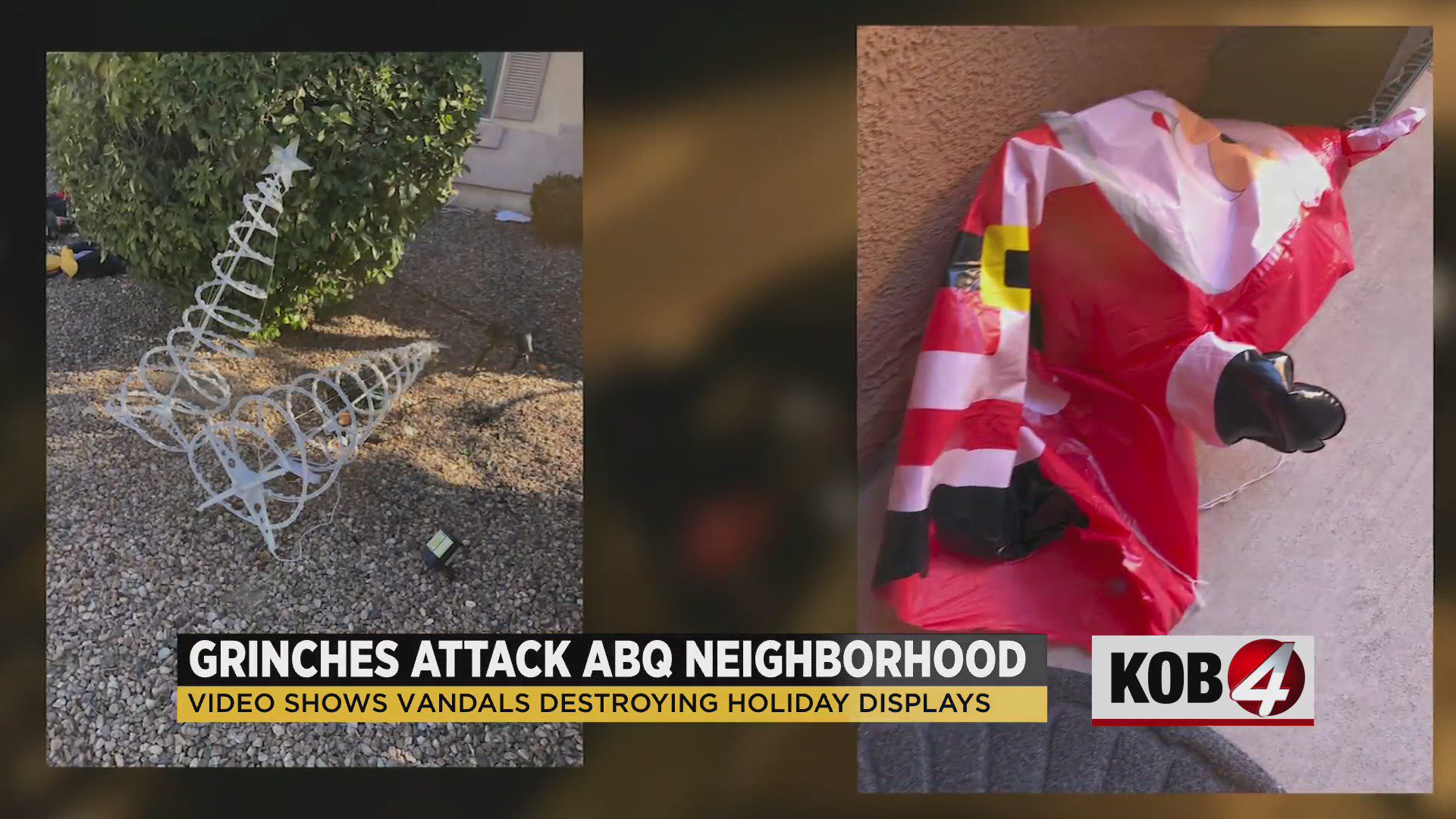 Bywater says there were in and out of his subdivision in just four minutes. Regardless of their speed, the vandals had a lot to work with.

“We will try to go a little bit above and beyond,” Bywater said.

Bywater’s neighborhood (located just northwest of Unser and Irving) is known for their elaborate light displays. Bywater estimates nearly 80% of all homes do some form of decorating during the holidays – including the beloved “Mr. Christmas”, whose home is covered in an estimated 50,000 lights. The neighborhood regularly invites folks to see the displays up close on Friday and Saturday nights.

“The smiles that you see on these kids’ faces when they come through and the wows, and the awes, and their jaw hits the floor when they turn the corner. That’s what it’s about, that’s the reward,” Bywater said.

Neighbors spent Saturday morning cleaning up and salvaging damaged decorations. The most costly damage was done to an LED Christmas tree outside a home in the northwest corner of the neighborhood – Bywater estimates it cost nearly $2,000.

Some neighbors were concerned about rebuilding their displays before folks arrived Saturday night.

Little did they know a Christmas miracle was heading their way.

“We saw the Facebook post about noon, and we were out of the house and hitting Home Depot before one,” said Kehaulani Ayze.

Ayze and her boyfriend Matthew McKelvey bought all of the store’s leftover decorations to donate to homes who were attacked.

McKelvey says a sales associate at Home Depot heard their story and gave them a 20% discount.

Ayze, McKelvey and Bywater loaded up a friend’s truck Saturday afternoon and installed nearly a dozen of the new decorations outside several homes.

One couple received a new inflatable, while their neighbors (with the LED tree) were given a new multicolored tree light.

Ayze did not want to reveal how much they spent on decorations. Instead, she wanted their act of kindness to inspire others during the holiday season.

Bywater says folks are still encouraged to visit his neighborhood and see their holiday displays up close.