The shocking details show how American taxpayers may have unintentionally helped China’s military become more of a threat to the U.S. over decades, as government-funded defense research later made its way to China’s labs.

The report details how China poached talent from New Mexico and then stole American ideas for cutting-edge technology, shining a light on the security of top-secret U.S. research on sophisticated weapons at the country’s top lab.

It shows deep connections between LANL and the Chinese government. It describes a recruiting network, showing many scientists, after leaving Los Alamos, later went back to China and helped with its military innovation. 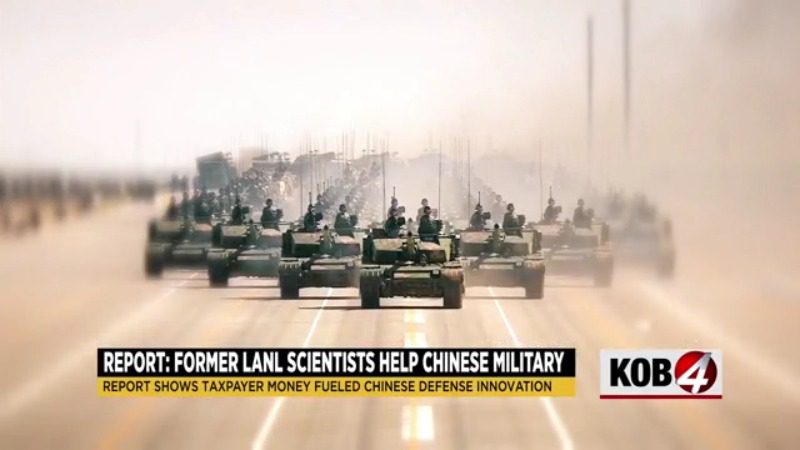 “No one can say this is not a national security issue,” said Bill Evanina, a former top U.S. counter intelligence officer. “We are perpetuating adversaries to use weapons against us, and that’s hard for any American to swallow.”

According to the report, there have been decades of Chinese recruitment. 162 LANL scientists that have left the lab later helped the Chinese military over the last 34 years. Many of them were paid a million dollars to lend their knowledge.

A Chinese newspaper article reports, “people have dubbed them the ‘Los Alamos Club.’”

“This is the first time we have a comprehensive, open source reporting that identifies the people, the places, the services and the organizations in China who are benefitting from that talent that once worked here at our national labs,” Evanina said.

In one example, the report highlighted one Los Alamos scientist, Zhao Yusheng. He got nearly $20 million in U.S. taxpayer grants, and in an 18-year career, he had a top secret “Q clearance”.

Zhao sponsored a researcher at LANL who, when they returned to china, filed a patent in 2007 on technology similar to one of Zhao’s projects at Los Alamos – developing bombs that can go deep underground.

“This is not an example of rogue actors deciding to put stuff in their bags and go back to China. This is a concerted effort by a nation state to identify, target and recruit overseas scientists back to their country,” said Strider CEO and Co-Founder Greg Levesque.

Strider said in its report that it’s not suggesting Los Alamos National Lab did anything illegal, and it said it’s not arguing LANL is responsible for China recruiting its employees.

A LANL spokesperson referred KOB 4 to a spokesperson for the U.S. Department of Energy, which oversees the lab.

The spokesperson said “international collaboration” is important, and without it America would be “at risk of falling behind in science and technology.”

“At DOE we work hard to strike the right balance between protecting and promoting our scientific ecosystem, including a rigorous security assessment and review process for employees,” the spokesperson said.

On Thursday, the spokesperson added the following:

“Our national security and defense require fierce protection of critical technology development, even as we safeguard the open science research that underwrites the United States’ technology leadership.  In response to growing research security threats, the Department of Energy has taken significant steps in recent years, including the adoption of rigorous vetting, counterintelligence reviews, and restrictions on participation in foreign talent programs. The Department of Energy also implements procedures to ensure compliance with U.S. export licensing requirements, including those governing the release of controlled technology to foreign nationals in the United States. We are committed to protecting and promoting our scientific ecosystem, technological competitiveness and national security.”

NBC News reporting shows there wouldn’t be criminal penalties for any former LANL employees in these cases, but some experts believe national labs shouldn’t be inviting foreign scientists to see American defense research.