ALBUQUERQUE, N.M. — Mark Ronchetti, the Republican nominee for governor, gave new details on what he’d fight for if elected.

“The current leadership has made it clear that crime to them, and crime to this governor, is a talking point and not a priority,” said Ronchetti.

Ronchetti says he’d push for a lot of changes on what many call “bail reform” which would lead to more people accused of violent crimes staying in jail until their trial. He said he would increase penalties for many crimes, from violent crimes to shoplifting, and appoint more tough-on-crime judges.

On the border, he would deploy the National Guard.

To tackle drugs, he said he would want to create a new network to investigate drug trafficking, and he wants to strengthen qualified immunity by beefing up protections for police to prevent people from successfully suing them. 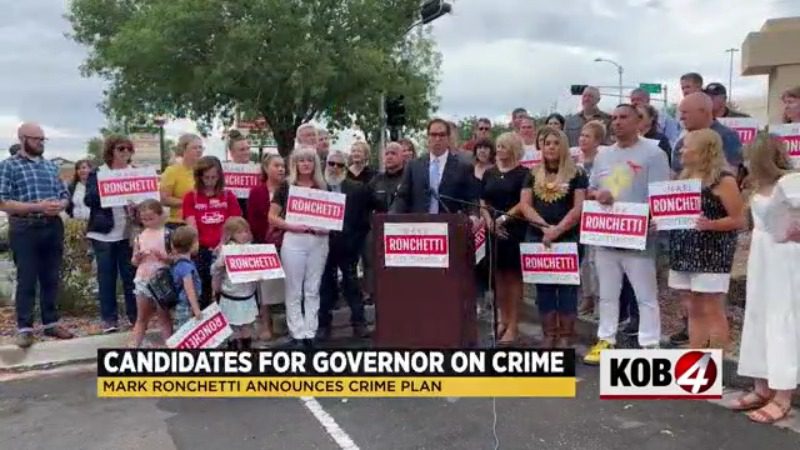 Some of his public safety proposals are different than those of his opponent – Gov. Michelle Lujan Grisham. But Ronchetti and Lujan Grisham do agree on a lot, like calling for bail reform. But the state Legislature would still have to pass any changes on that, and some Democrats resisted it earlier this year.

Tommy Lopez: “How would you convince people who aren’t a member of your party to pass that kind of initiative?”

Mark Ronchetti: “What I would ask them is, does crime affect you? Is this a concern to you? This is what gives a real indication of what we’re dealing with. This governor, when she wants to pass something, she has a near super-majority to do it, but she didn’t do it. She couldn’t do it, because it’s not a priority.”

KOB 4 asked Ronchetti if he has any other specifics on how he would get the votes, and he seemed to say that he’d get New Mexicans to put more pressure on lawmakers.

“If we get enough New Mexicans to say, ‘enough, let’s stiffen the penalties. Let’s make sure that if someone is going to take part in an armed robbery that they’re staying behind bars until trial, and then if convicted, they go to jail,'” said Ronchetti.

Both Lujan Grisham and Ronchetti say they support the police. The governor pushed for millions in raises and training for state police and a new crime lab – all of which passed the Roundhouse.

When asked about what changes the governor and state lawmakers have made, including toughening some penalties for crimes, Ronchetti said they just tried to check a box.

In response to Ronchetti’s proposals, the governor’s campaign pointed to her work on tougher penalties for violent crimes, and more law enforcement funding.

They also said: “New Mexicans deserve a leader with a track record of delivering on public safety—not an out-of-touch, inexperienced TV weatherman.”