ALAMOGORDO, N.M. – A day after the Otero County Board of Commissioners refused to certify the canvass of last Tuesday’s primary election results, the New Mexico Secretary of State’s Office filed a request with the New Mexico Supreme Court for an order that would force the commissioners to do so.

“The post-election canvassing process is a key component of how we maintain our high levels of election integrity in New Mexico, and the Otero County Commission is flaunting that process by appeasing unfounded conspiracy theories and potentially nullifying the votes of every Otero County voter who participated in the primary,” Secretary of State Maggie Tolouse Oliver said in a press release late Tuesday announcing the suit.

The suit comes after the three commissioners voted against approving the canvass of the June 7 primary election results, thereby disrupting the certification process in the southeastern conservative New Mexico County.

Before the lawsuit was announced, Robyn Holmes, Otero County Clerk, told KOB 4 that her office had done a great job in how it conducted the election, but that the three commissioners, took the action because they do not trust the vote-counting machines that were used and are mandated by the state.

“Our commission decided they did not feel good about our tabulators. So they requested that the county attorney get a court order to open all the ballot boxes and bring the poll workers back in and have them hand tally the ballots,” Holmes said. 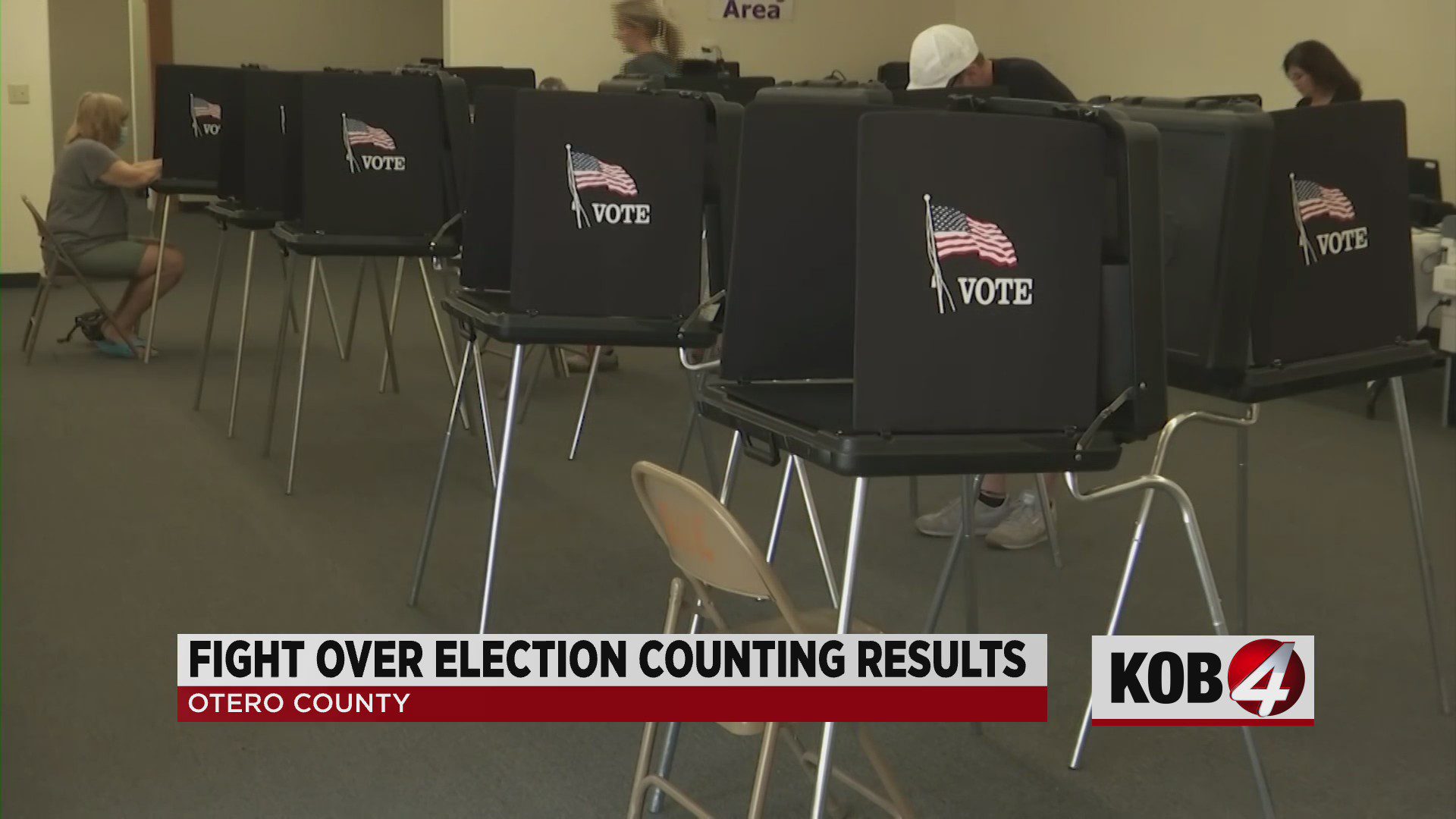 Commissioners want to get into the ballot box as part of efforts to recount the primary election ballots by hand, citing distrust of the machines.

“I have huge concerns with these voting machines. I really do. I don’t I just don’t, in my head, think that they can’t be manipulated,” said Vicky Marquet, who represents County Commission District 3.

The Secretary of State’s Office said the state election code does not permit such a recount at this stage, and the secretary’s office has not approved such a process.

The vote tabulating machines are sold by Dominion Voting Systems, a voting hardware and software company, which has become a target of widely debunked claims by former President Donald Trump and many of his supporters that the systems are susceptible to hacking, and led to his defeat in the 2020 presidential election.

Couy Griffin, the District 2 county commissioner and the controversial Cowboys For Trump founder also was vocal in his opposition.

“It all simmers down to trust. And right now, and I think I can speak for my other commissioners, we have a big issue with trust right now,” he said.

Dominion, as well as federal and state officials, deny the claims with the Department of Homeland Security in late 2020 even going so far as to call the election “the most secure in American History.”

The Secretary of State’s Office has decried the county commission for not certifying the results.

“The commission is doing an extreme disservice to the voters of Otero County and candidates seeking to have their names on the general election ballot by refusing to certify the results of the 2022 Primary Election, and they’ve done this without any indication that the results were in question and over the objections of the Otero County clerk,” Alex Curtas, communications director for the New Mexico Secretary of State’s Office said Tuesday before the suit was announced.

Counties under state law must no sooner than six days and no more than 10 days after an election certify the results through a county commission with a summary of the election provided by the county clerk.

According to the New Mexico Secretary of State’s Office, the results then go to the state canvassing board for certification, allowing the winners of the primary to appear on the general election ballot in November.

Holmes told the commissioners Monday that failing to certify could delay efforts at recounts for several close county races, such as a Republican primary race in District 2 where the candidates are separated by just 11 votes.

She also warned that if the canvass was not approved by the commission and the county’s refusal was not because of flaws in how the election is counted, a judge could issue an order forcing them to do so. And failure to do so would mean they would be in contempt of court.

Trump carried Otero County with 62% of the vote, but that has not quelled the concerns of the commissioners who have openly questioned the election, and expressed a lack of confidence in the vote-counting machines.

Earlier this year, the three commissioners, all Republicans, enlisted David and Erin Clements, a husband and wife and who are proponents of forensic audits to do a door-to-door canvas and forensic audit of the 2020 election results. The county also approved $49,000 for EchoMail to help the Clements in their audit.

EchoMail, which is based in Massachusetts, pulled out of its contract with the county earlier this year, after both the New Mexico Secretary of State’s Office and a committee in the U.S., House of Representatives said they would investigate the audit. A report of what little work they had done did not show any evidence of voter fraud.

The Clements has denied allegations the door-to-door canvasing they and volunteers with their group the New Mexico Audit Task Force have engaged in voter intimidation through their canvassing efforts.

On Thursday the commissioners, in addition to calling for a hand recount of the primary election results, called for no longer using the Dominion voting machines and for getting rid of the two ballot drop boxes the state is required to have under state law.

The Secretary of State’s Office has said the commission lacks the authority to take such action on all three items. Holmes has agreed and said that vote on those measures is beyond the purview of the commissioners.

“The legislators create election law. There the ones that set election law. Me as a county clerk and them as county commission, all we do is follow the law. So we don’t have any authority to create laws or write laws,” she said.

Commissioners have until Friday to certify the results. But Holmes said, before the lawsuit was filed, that most of the commissioners will likely be out of the county for the rest of the week.