A police report outlines the situation – from the moment officers tracked down the student’s car in the school parking lot, until officers were essentially forced to let him go.

On Tuesday, May 24, Volcano Vista administrators reportedly found three students hiding in a car in the school parking lot. Another student had told administrators that one of those students possibly had a gun.

According to the police report, one of the boys got out and officials spotted a handgun in his bag that was inside the car. Police said it was a ghost gun without a serial number, along with 20 rounds of ammunition. 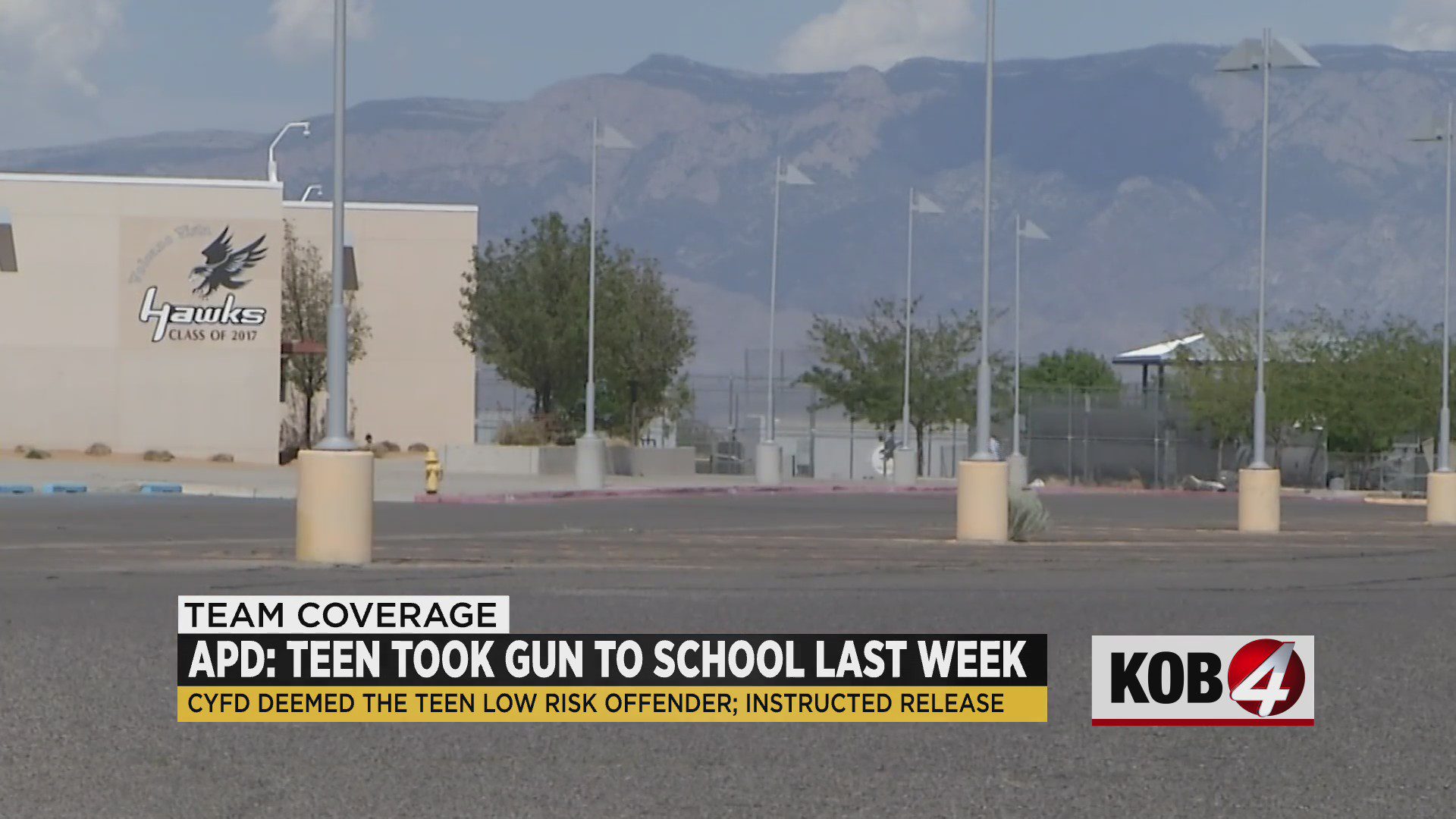 It’s protocol for police to then contact Juvenile Probation and Parole within the New Mexico Children, Youth, and Families Department. Police said the suspect was becoming more irate at that point – hitting his head against the inside of the patrol unit. Ultimately, a juvenile probation officer with CYFD told police the teen was low risk and to not arrest him.

Police said once the teen learned he would be let go, he calmed down. An officer said the student thanked him for stopping him from getting into the car where the gun and ammunition were located, saying, “It would have been bad.”

Bernalillo County District Attorney Raúl Torrez is calling for change and transparency when it comes to these types of situations.

“Unfortunately, this is something that I think is a very serious flaw and a very dangerous flaw in the way our criminal system and our children’s code currently operates,” Torrez said.

He listed several concerns about the way the system is set up now. He said it’s dangerous that a teenager can bring a loaded gun to school and not have to spend a minute behind bars.

“It is, in my judgment, unconscionable that an officer would find someone on campus with a weapon and ask to have that person detained, and based on some risk assessment instrument that we have very little information about, that person would be set free,” Torrez said.

Torrez is also concerned about what happens after the teenager is released and how Juvenile Probation and Parole officers make sure the child gets the help and services they need to make sure they are not a danger to themselves or the community.

On Friday, he sent a letter to the Albuquerque Police Department and another letter to CYFD.

In the letter to APD, he asked to meet with the chief of police to discuss ways the district attorney’s office could be notified when officers request a juvenile gets detained and also when they get denied.

In the letter to CYFD, he asked that they reveal how many times this has happened and is also called on them to change their risk assessment tool to be more strict.

In that same letter to CYFD, Torrez calls for transparency on how their officers follow up with juveniles to make sure they get the help and support they need.

Torrez is also calling for change at the state level. He said his office is not notified about misdemeanor juvenile offenses. He wants lawmakers to amend the law so any time a juvenile is caught with a firearm, it is a felony.

“It’s an extremely dangerous thing to do and frankly, it’s a common sense fix,” Torrez said.

Shaun Willoughby, the president of the Albuquerque Police Officers’ Association, sent KOB 4 a statement about the concerns they have about the current system:

“We have tried to bring attention to this practice, fearing that a serious situation would arise from allowing a dangerous violent juvenile loose not to face any consequences. We feel very strongly in maintaining an officer’s discretion to arrest. These juveniles have broken the law and should be held accountable for their actions. “

CYFD, threats, and the rights of teens

Some within our legal system believe our current process is exactly what should be happening regarding juvenile suspects.

Public defenders say a minor going into custody almost always is not the answer. Jennifer Barela, deputy chief of operations with the Law Offices of the Public Defender, responded to the specific scenarios where kids bring guns and ammo to school, then walk free.

“It makes sense to me because arresting somebody at that point isn’t necessarily going to stop that behavior,” Barela said. “We want to stop now, when they’re young, so they don’t end up in the adult system.”

Barela added that sometimes when kids have guns at school, they have no intention of using them.

The argument is that a young person getting detained should only happen after the most violent incidents.

“You can have accountability without incarceration. If we can give them the services they need, whether that’s mental health services, substance abuse issues, family counseling – if you can do that, and stop them from committing further crimes – then that is a success for all the community,” Barela said.

She said there are many examples of kids getting that kind of help and never committing another crime.

The goal is to find out the source of the problem, she says – to answer the question, why are kids acting this way?

Public defenders believe New Mexico will not get those answers while a child is in custody.

KOB 4 reached out to CYFD to comment on this debate. A spokesperson said privacy laws prevent them from discussing any specific case.