ALBUQUERQUE, N.M. – An Albuquerque police detective who was once recognized as one of the best is suspended, now he’s suing the city claiming its retaliation.

Detective Jesse Carter claims that some of his fellow officers were violating a suspect’s constitutional rights, and now he claims he’s facing backlash for a case from over two years ago.

Detective Carter was the 2011 non-uniformed Officer of the Year for the Albuquerque Police Department. But then, in late 2020 he was suspended.

Now in a lawsuit filed Friday, Carter alleges he was wrongfully suspended in retaliation for raising concerns about what he called “unethical and illegal conduct” by his fellow homicide detectives.

In March 2020, Carter was told to review the murder of Jacqualine Vigil – a mother of two state police officers. 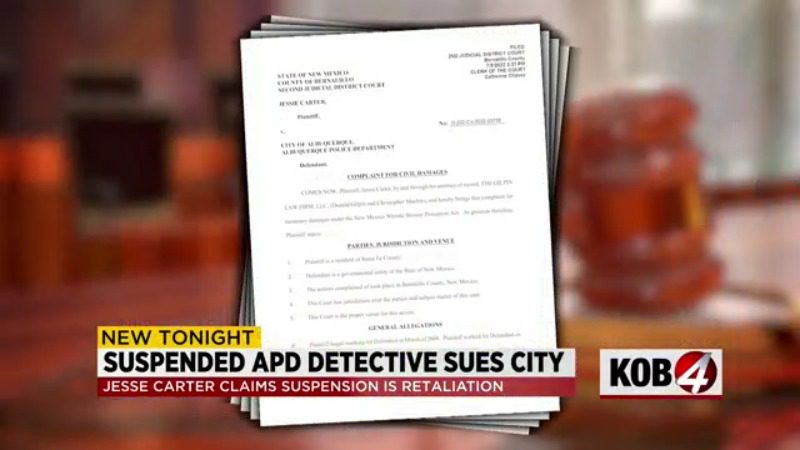 In Carter’s review – he found – and later reported the officers in the case violated the murder suspect’s Fifth Amendment rights after not reading him his Miranda rights and ignoring his request for counsel.

The lawsuit alleges shortly after this report, Carter was reassigned to a U.S. Marshall’s task force and later notified of an internal investigation of his actions on a case from 2019.

Carter was the lead investigator on the case and Estrada spent six days behind bars for crimes she didn’t commit.

She filed her own lawsuit against the city for her wrongful arrest and has settled another lawsuit with Albuquerque Public Schools.

Carter now says he was suspended for 32 hours because of the wrongful arrest, but he claims the city didn’t follow the contract with the police union to take action no later than 90 days after the incident.

Carter is now suing for damages.

KOB 4 reached out to the city and APD for comment. A spokesperson with APD said they will get back to us.