ALBUQUERQUE, N.M. – Another TikTok trend called the “One Chip Challenge” is making the rounds on and off social media. To complete the challenge you eat an entire chip, prove it with a picture of your blue tongue, and wait as long as possible to eat or drink anything.

KOB 4 wanted to see how easy it is to get one of these chips.

“OK we tried three different stores, finally tracked some down at a Circle K, let’s try it.”

Ultimately the warning labels in the store and on the box made us second guess the taste test. 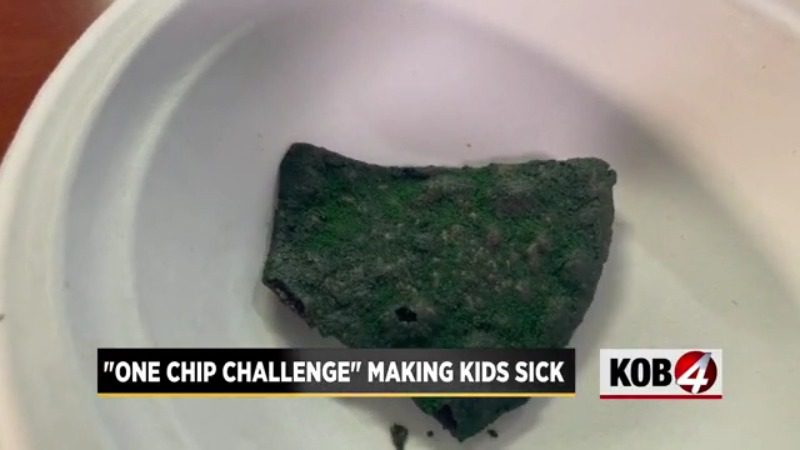 “After touching the chip, wash your hands with soap, don’t touch your eyes or other sensitive areas.”

Not to mention the Carolina reaper and scorpion chile pepper dusting, on the individually wrapped chip inside its own coffin-shaped box. But the warning labels haven’t worked for everyone.

“It seemed like it really had an uptick last week,” said Krystal Gutierrez director of Health and Related Services of Clovis Municipal Schools.

Gutierrez confirms about 30 children in their district have reported issues after trying this chip. Mostly middle schoolers, but some elementary students too.

“That’s when we really felt compelled to say ‘hey parents we need your help we don’t want these on campus for sure,'” said Gutierrez.

Symptoms mostly include stomach issues, or eye and skin irritation in children who only touched the chip.

“Maybe like five students have reported eating the whole thing but some of them just take an eighth of it and have had full-blown symptoms where they’re having to leave school,” Gutierrez said.

And if it gets to that point.

“They need to identify the problem and then something they can do that sometimes helps is milk. It actually does help with hot food although depending on how long it’s been since the child ate the chip,” said Dr. Alex Cvijanovich president of New Mexico Pediatric Society.

Cvijanovich says you can keep your children home unless the stomach issues persist.

“I think if there’s repeated vomiting that becomes a concern because then you have to think about damaging the esophagus,” said Cvijanovich.

But both professionals agree staying on top of trends, is the best form of prevention.

“Awareness is the best bet– to get that information out there to parents who may not be aware this $5 thing in the grocery store their kid asked for may be causing harm to their kid or other kids at the school if they share,” said Gutierrez.