RIO RANCHO, N.M. – A former Rio Rancho student would have graduated high school this year, but in 2009 five-year-old Trinity died of the H1N1 flu.

Since then, the students and staff at Shining Stars Preschool have honored her through a garden on campus. Except two years ago, Shining Stars moved to a new location. Now, a new mosaic is honoring her memory.

“We are standing in front of a project that the whole school worked on, that we’ve been working on since the beginning of the school year,” explained Juliet Tross, the art teacher responsible for creating the new mosaic for Trinity.

It’s quite literally a work of art. Each piece of the mosaic was put together by kids at Shining Stars. 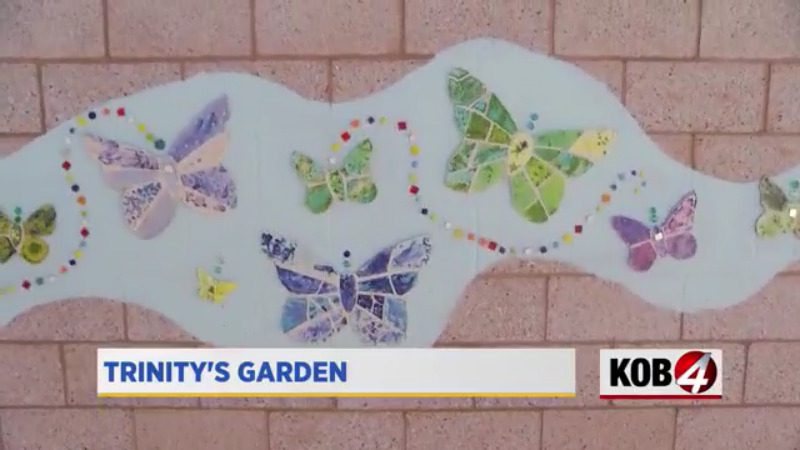 In 2009, five-year-old Trinity was a Shining Stars Student.

“Unfortunately, Trinity lost her life when she was a kindergartner at the beginning of the school year from the H1N1 virus,” explained Principal Kim Johns.

They created a garden in Trinity’s memory, but when the preschool moved to a new building, they couldn’t bring it with them.

Last year, they rededicated the garden and gave Trinity’s sign a new coat of paint.

“Trinity loved the colors. She loved butterflies,” remembered Johns. “So this is really in honor of Trinity, and representing the mission here that we do at Shining Stars.

The new mosaic is their way of keeping Trinity and her memory close.

“One of my favorite things is being out here when the kids are here,” said Johns. “They’ll go up to a piece and say, I did that.”

Tross spent all school year creating the project – squeezing in time at work and at home – from rolling out the clay to putting all the pieces back together and making sure each kid was represented.

“Almost 600 pieces and 81 butterflies all together,” described Tross. “It was a labor of love of everybody.”

“They’re proud of this. and this is something that will be here for years to come, and everyone will remember Trinity,” said Johns.

This year, 2022, Trinity would have graduated high school.

“Each of them have a very important place in this world,” said Johns. “When they work together, they’re able to create something so beautiful as this.”

At one point Tross said she dropped one of the pieces, but what’s great about mosaics is even when they break you can create something even more beautiful.