ALBUQUERQUE, N.M. – For the first time, we are hearing from the victims who say they were attacked by a man pretending to be an Albuquerque police officer.

“He keeps saying APD. He is slurring his words, and then he reaches inside the car and like I said at that point I’m like okay cool we are just going to die.”

The whole incident was caught on camera back in April and court records reveal it’s not the only time the suspect has tried to fool residents.

All three victims say Raul Martinez wouldn’t let them go, but it didn’t take them a long time to figure out what was really going on.

“We were just really scared.” 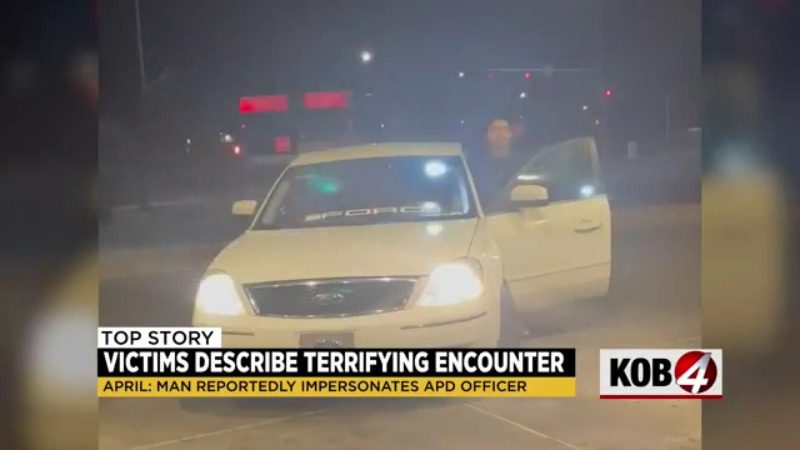 Cell phone video showed the terrifying moments for three women who were pulled over by a man claiming to be a police officer.

The victims told police that on March 26 a car began to follow them and at first, they thought it was a police cruiser until, “he hits her car twice and that’s when we said okay we need to stop.”

They go to a gas station and started recording. They knew something wasn’t right when they noticed the giant lettering on the car’s front window and the color of the emergency lights.

So they asked him.

“Show me your badge.”

Martinez: “I don’t need to show you.”

At this point the victims realized it wasn’t an officer, which made what happened next even more frightening.

“He goes and reaches into his car and at that point I thought he was going to pull out a gun.”

Instead, the suspect pulls out his phone and pretends to call for back-up. The victims still don’t buy it and confront him.

“I went around to the back of his car to record his license plate and at that moment he jumped into his car and sped away.”

Police say the person impersonating an officer is Raul Martinez and this wasn’t the only time he pretended to be an officer that night.

The second instance was the same situation only this time, Martinez acted like he was pointing a gun at the driver.

The tense altercation lasted a few minutes until he decided to once again get in his car and leave.

Two cell phone videos lead to Martinez’s arrest. An officer recognized Martinez and his car after pulling him over for an accident the week before.

Court documents reveal that the officer scolded Martinez for the flashing lights and warned the department he may be impersonating an officer.

Martinez was released on his own recognizance just a few weeks ago. He is facing several felony charges including aggravated assault with a deadly weapon and false imprisonment.