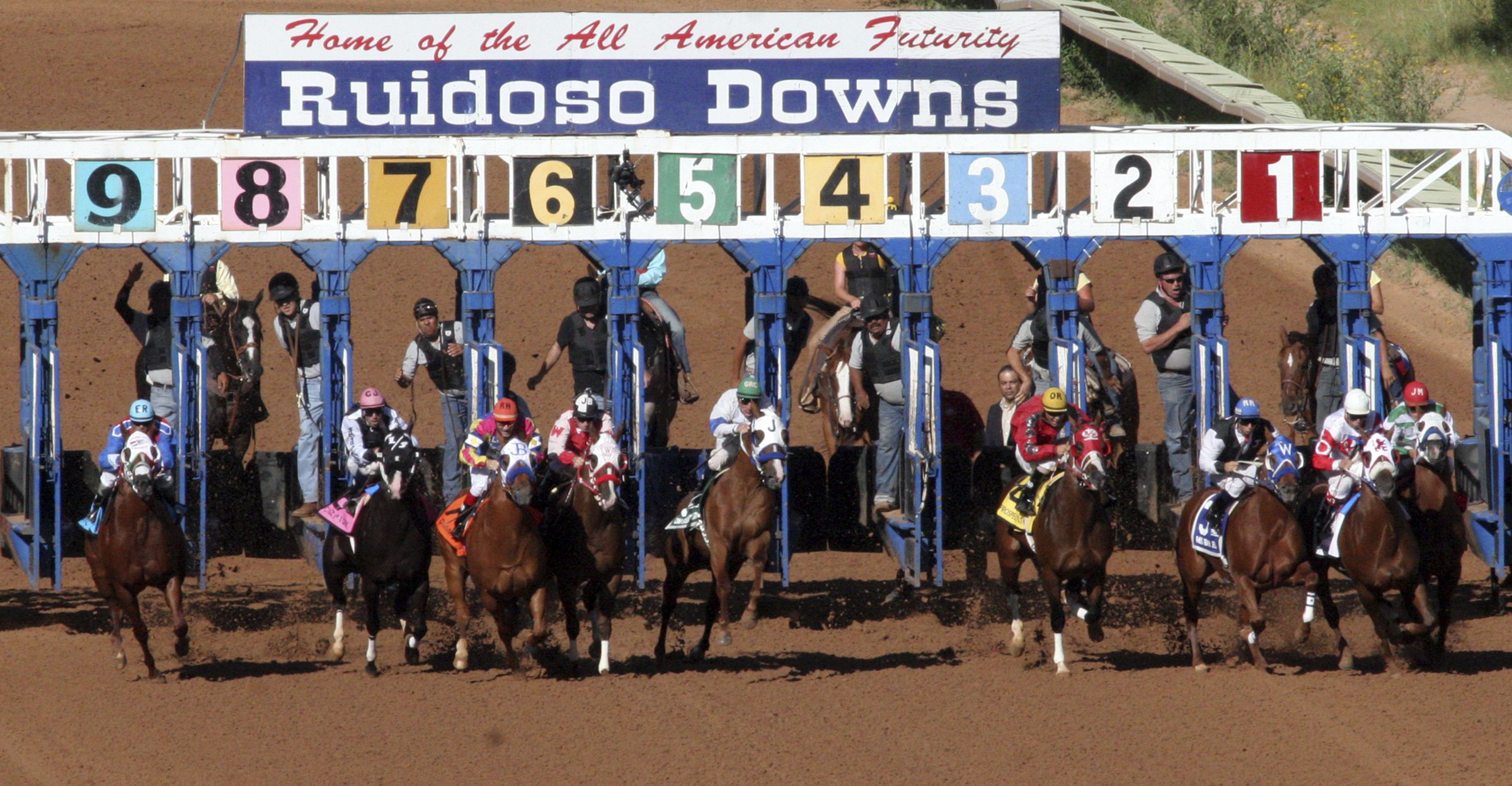 FILE - Horses leave the starting gate at Ruidoso Downs Racetrack and Casino in Ruidoso, N.M., on Sept. 6, 2010. New Mexico regulators on Monday, July 11, 2022, said several horses that were feared dead by animal advocates following a weekend of racing at one of the state's premiere horse tracks are alive and well. Officials with the New Mexico Racing Commission said only one animal died after being injured during recent trials at Ruidoso Downs and that photographs and veterinary reports submitted to the state show the other seven were in their stalls and were fine. (Rudy Gutierrez/The El Paso Times via AP, File)

ALBUQUERQUE, N.M. (AP) — New Mexico regulators on Monday said several horses, feared dead by animal advocates following a weekend of racing at one of the state’s premiere horse tracks, are alive and well.

Officials with the New Mexico Racing Commission said only one animal died after being injured during recent trials at Ruidoso Downs and that photographs and veterinary reports submitted to the state show the other seven were in their stalls and were fine.

“Apparently it was so brutally hot the horses had to be vanned back to the stables after they ran, which of course to us means they shouldn’t have been running in the first place,” said Marty Irby, the lobbying group’s executive director.

Irby leveled his criticisms as advocates push for track owners and regulators nationwide to be more vigilant, now that new federal safety mandates took effect this month and as the industry prepares to adopt more uniform anti-doping rules.

Irby was among those who testified before Congress in support of the Horseracing Integrity and Safety Act, which was signed into law in 2020. It is being implemented in stages, with the racetrack safety program starting first. The anti-doping and medication rules are expected in early 2023, leaving the 38 states where horse racing occurs in charge for now.

The sport’s lack of uniform rules across the U.S. came into focus after Medina Spirit tested positive for a banned substance following the 2021 Kentucky Derby.

California, New Mexico and other states also have received black eyes over the years for catastrophic injuries among race horses.

An investigation in 2012 found that five of the seven tracks with the nation’s highest incident rates were in New Mexico and that four of the state’s five tracks had incident rates double the national average. While all five tracks saw declines in their fatality rates over recent years, legislative analysts found that 112 horses died as a result of race-related injuries between 2018 and 2020.

There were 13 catastrophic injuries in 2021, according to records provided by the New Mexico Racing Commission.

Ismael “Izzy” Trejo, the commission’s executive director, said the rate per 1,000 race starts is below the national average and there have been no complaints from jockeys or horse owners about conditions at Ruidoso Downs.

The track started its season in late May and is preparing for the Rainbow Futurity later this month. It’s best known for hosting what is described as the richest quarter horse race in the world — the All-American Futurity.

“Of course losing one horse out of 330 starters this weekend is never a good thing,” Trejo said. “But if there was a method to prohibit horses from experiencing catastrophic injuries on the racetrack, we’d be the first — as long as I’m in this chair — to implement it.”

Trejo and others have said one hurdle to enforcing anti-doping rules and other regulations going forward will be the shortage of licensed veterinarians nationwide.

Irby added that ensuring compliance from state racing authorities also will be key.

“I am convinced the Horseracing Integrity and Safety Act is the American horse racing industry’s last chance to clean up their act and bring legitimacy back to the sport, as well as breed confidence with the betting public, but there are so many groups and people already working to undermine the law at every turn,” he said.

Ruidoso Downs general manager Ethan Linder said he spent the morning at the track barn, checking on the horses that were on Irby’s list. He wanted to put his hands on each one, talk to each trainer and confirm the status before reporting back to state regulators.

Linder said it’s too early to make predictions as the horse racing law is implemented, but he expects some pressure from activists. He added that many things called for by the act are already in place at Ruidoso Downs.

“Our job is to comply and when we do that and if anything were to happen we will let everyone know that by no means did we cut any corners,” he said. “We are following the regulations to a T and that’s the best we can do.”