ALBUQUERQUE, N.M. — Four Albuquerque police officers who nearly lost their lives in the line of duty were honored by community members Friday.

The Foothills Community Policing Council gave them a portrait of all four of the officers together. Chairman Robert Carleton told KOB 4 it was taken in December. They were inspired to do this after witnessing their heroism the day of the shooting.

"We think this a great way to show our appreciation because it has lasting value for the APD Foothills Command," Carleton said.

Sgt. Sean Kenny along with officers Mario Verbeck and James Eichol were at Friday’s ceremony. We were told the fourth officer Harry Gunderson wasn’t feeling well so stayed home as a precaution.

"We love it we think it’s awesome,” Kenny said. "The fact that they took the time and came up with the idea to bring us together take a photo of us all together and provide us not only a copy for the substation but also for each individual is super cool." 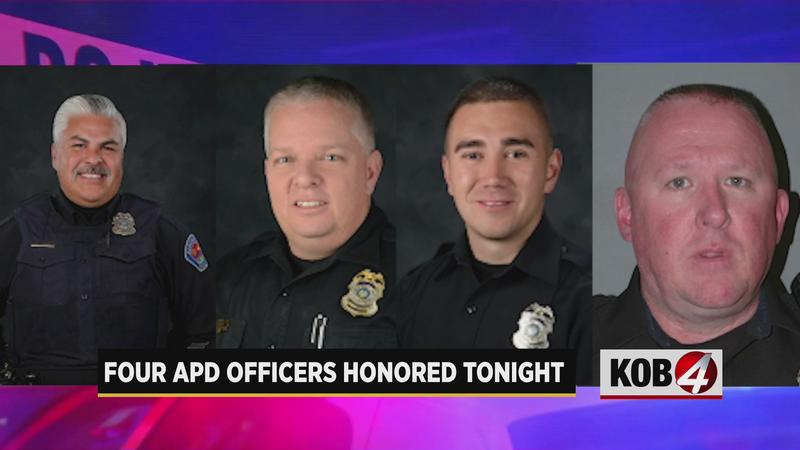 He remembers Aug. 19, 2021 clearly, when the four officers were responding to a robbery.

"This was a normal quiet Thursday morning it sounded like a call we have all handled hundreds of times before," Kenny said. Then in a split second everything changed, when the suspect they were after fired shots at them. "In a blink of an eye it went completely sideways and became completely chaotic."

Kenny was shot in the chest but was saved by his bulletproof vest.

"I’m physically fine,” Kenny said. “The plate stopped the round that hit me straight in the chest."

KOB 4 also asked about the other officers. Gunderson was hit in the face with glass. Kenny says his eye is back to “100 percent."

“Both are doing much, much better but they still have a road a road to go for their injuries," Kenny said.

The portrait will be hung up at the APD Foothills Command substation right next to the training room. Not only to honor them, but Kenny says to serve as a reminder to all officers.

"Things can go sideways quickly in this job,” Kenny said. “They need to stay on their officer safety and they need to stay basically in tune with what’s going on around them."

Police said the suspect is James Ramirez. He was taken to the hospital after getting injured by officers that day and is currently in custody.