"I had to pull over before a white car almost hit me, then five minutes later he’s on the opposite side and they’re dead, I know they’re dead," said one caller.

This is the first time the public has been able to hear what officers were saying to each other during and after the high-speed pursuit. The audio also includes Santa Fe Police Officer Robert Duran describing what he saw as he chased Jeannine Jaramillo:

"Female in a white Malibu… We’re currently traveling in the opposite lanes of St. Mike’s… swerving in and out of traffic… ran red light… headed off to I-25, wrong direction… speeds at 87… light traffic. Speeds still at 90…"

One woman called 911 after she witnessed the I-25 crash that killed Duran and retired Las Vegas firefighter Frank Lovato. 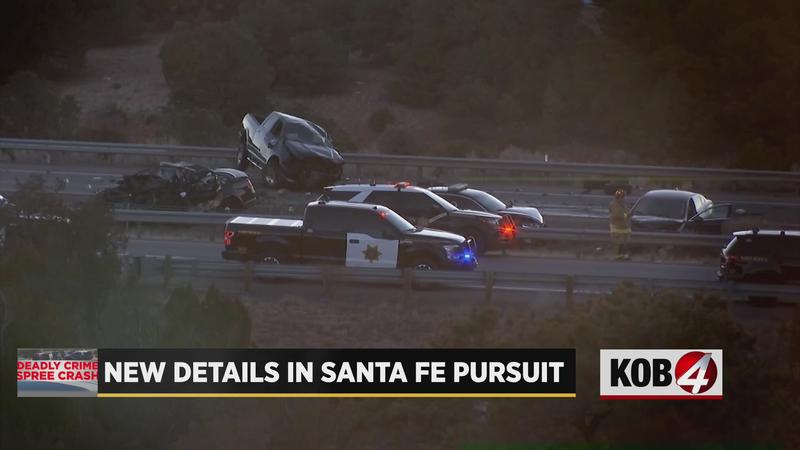 "It’s on I-25, coming from El Dorado. It was a head-on. There were three, maybe four cars involved."

KOB 4 also received the 911 call that sparked the chase – a man relayed what Jaramillo had just told him, claiming a man was holding her against her will.

"She asked me to call the police. Somebody’s in her car, won’t get out. She says he has a knife held on her."

An arrest warrant filed Monday also includes new details on how the deadly crash happened. According to the warrant, Lovato and Duran’s vehicles collided. Lovato was in his pickup truck going north n the left lane, and avoided a head-on crash with Jaramillo – but then his truck hit Duran’s vehicle head-on.

KOB 4 also learned that Duran was the secondary pursuit vehicle. There was an officer in front of him and behind him.

An officer reported, "Numerous uninvolved motorists had to quickly maneuver their vehicles to avoid a head-on collision with the fleeing subject vehicle."

In the warrant, it’s revealed that Jaramillo also told investigators about the man she lied about. She said he poured gasoline on her before the chase and she was afraid he was going to set her on fire.

It sounded like investigators weren’t buying her story from the beginning. One officer notes that Jaramillo didn’t smell like gasoline and did not have a visible injury to support her story that she was struck so hard she lost consciousness.

Investigators have more evidence than just their observations that prove she acted alone. The car’s data shows no one was in the passenger seat at the time of the crash and a weight sensor shows that only the driver’s side airbag was deployed. Her DNA was on the airbag.

Hernandez was expected to have a pretrial detention hearing Monday for the pursuit in Luna County last year, but it was postponed.