ALBUQUERQUE, N.M. — Many law enforcement leaders across New Mexico have voiced their frustration at how many officers have been shot at and injured this year.

Earlier this month, police said two Valencia County deputies were hurt in a shootout and car chase. The newly-released bodycam video shows deputy Jacob Townsend getting shot at and hit while responding to a call. New Mexico State Police Chief Tim Johnson said officers are getting shot at far too often.

"Beyond disgusted with the violence that we’re seeing in this state. It’s a little frustrating these days, as I’m sure y’all can imagine," Johnson said.

Last month, four Albuquerque police officers were hurt after a robbery suspect shot at them.

"It is incredibly frustrating that over the course of the past few weeks we’ve had four incidents in the metro area where law enforcement officers have been fired upon," said APD Chief Harold Medina. 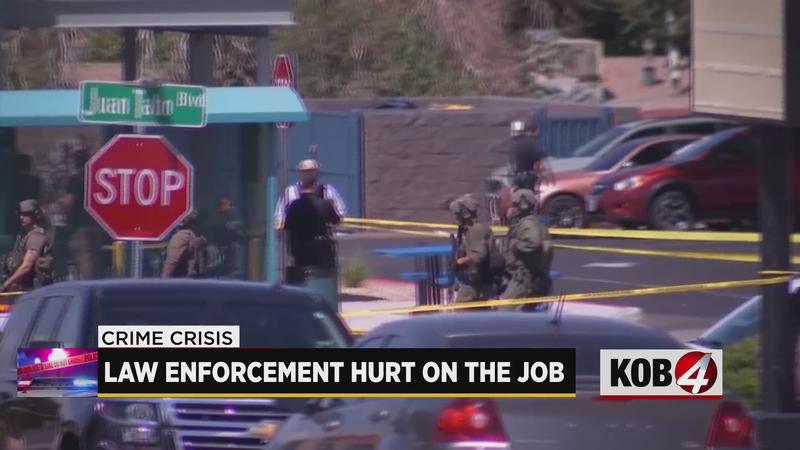 In one of those incidents, Albuquerque police said an officer was shot after getting caught in crossfire while driving downtown in July. That wasn’t the only July incident, APD also said a suspect took a city-owned bait car and fired multiple shots at officers.

Police shot suspects in three shootings in the Santa Fe area this summer, including one in early July when a man shot at officers.

In February, witness video shows a man throwing an object at Albuquerque officers in the middle of San Mateo. Police said one officer suffered a cut.

During that same month, APD said a suspect shot at and injured an officer during a SWAT standoff.

Then, on Feb. 4, state police officer Darian Jarrott was shot and killed at point-blank range in Deming. The suspect was a known drug dealer in southern New Mexico, and he was the focus of a federal sting operation. The suspect also shot at a Los Cruces officer that day.

This list is not even complete. Law enforcement leaders have told KOB 4 they hope the state legislature takes action in January.