ALBUQUERQUE, N.M. — Police released more information about the man who was cited Sunday at a rumored Proud Boys rally that never happened.

The man, who was armed with a rifle, got into a tense standoff with people who showed up to counterprotest the Proud Boys at Civic Plaza. He was later identified as Deyontae Williams.

Williams attended the protest with his family and claimed to not be a member of the Proud Boys, however it wasn’t long until APD stepped in and escorted Williams into the convention center.

“There was a lot of concern throughout because this gentleman did have a child with him,” said APD spokesperson Gilbert Gallegos.

Video footage from the interaction between Williams and APD details confusion for all parties, which later led to an APD sergeant being put on leave after the incident.

APD officer: At the point that we contacted you, you’re being detained.

Williams: Why was I disorderly?

APD: For having your rifle in a place to cause civil unrest.

Williams: I wasn’t doing that.

APD said there was a breakdown in the chain of command about whether charges would be pressed against Williams.

“It wasn’t based on opinions or what should happen or should not happen,” Gallegos said. “It was just actions were taken and the chain of command wasn’t aware why these decisions were being made at the time, so they put him on leave just while they investigated. They quickly looked through the situation. The concerns were addressed, so they put him back on duty.”

According to video footage, Williams appeared to be confused. He reached out to KOB 4 Monday morning to say that he hasn’t been charged. However, APD said that’s not the case, and that he hasn’t received his summons in the mail yet.

Williams is facing a charge of child endangerment. 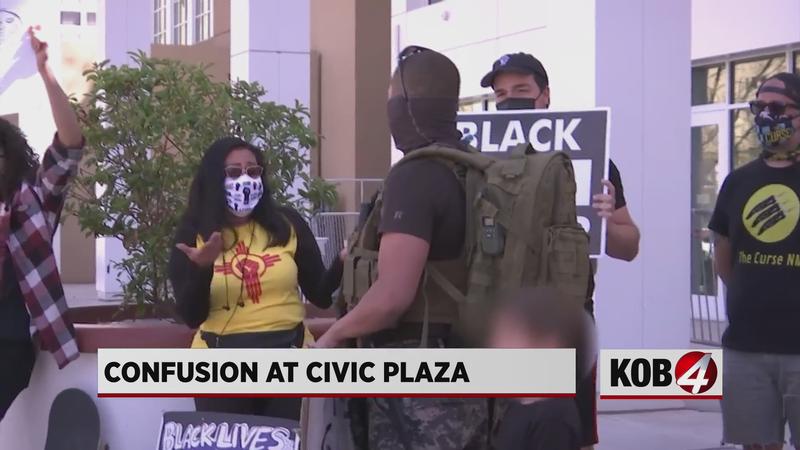 APD also added that they’re going to change who they send to future protests, and said there will be detectives on scene to press charges. Their hope is that other officers will be freed up to handle crowd control and safety.