ALBUQUERQUE, N.M. – Albuquerque police have arrested 14-year-old Marcos Trejo and charged him with murder. Police say he is a West Mesa High School student who shot and killed 16-year-old Andrew Burson, a classmate, outside the school Friday.

Homicide detectives learned through investigation that Trejo and Burson knew each other from school, and Burson had accused Trejo of stealing his gun, which was described as a “ghost gun” or “Glock replica” purchased online.

Trejo was able to get away and ran southbound on 64th Street. Burson started to run after Trejo. That’s when Trejo pulled out a handgun and fired five to six rounds at Burson. Burson was struck several times by gunfire. He died at the scene as a result of his wounds.

Detectives apprehended Trejo at a West Side home Friday evening and executed several search warrants. Trejo was booked overnight into the Bernalillo County Juvenile Detention Center. He is charged with an open count of murder and tampering with evidence.

"I want to reassure the public, this incident is not a reflection of the rest of the WMHS community and its students," Albuquerque Police Department Chief Harold Medina tweeted Saturday. "We stand with them and we will redouble our efforts to keep guns out of the hands of teens."

APS officials said they will have grief counselors at the school next week.

There will be no classes for West Mesa students Monday. However, counselors will be available for freshmen and sophomores from 9 a.m. to 11 a.m. and for juniors and seniors from noon to 2 p.m. Monday. 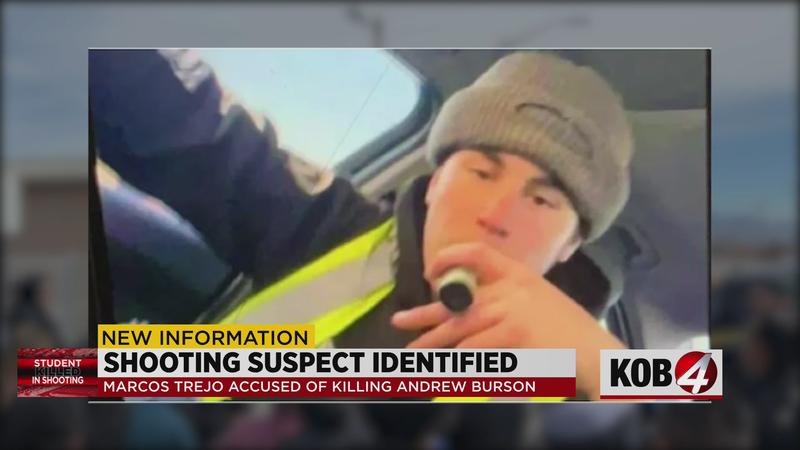