ALBUQUERQUE, N.M. – The Albuquerque Police Department released the names of the four officers injured in Thursday’s shooting in northeast Albuquerque.

"I know every single one of these officers and I would consider every single one of them friends," said Shaun Willoughby, president of the Albuquerque Police Officers’ Association. "These are all family men. They’re fathers and they’re coaches and they’re leaders amongst their peers, highly respected, and I’m just honored to be able to call them friends. They’re heroes."

Verbeck, who has been with APD since 2004, was critically injured and remains in critical condition after being shot at the base of his neck.

Eichel, who has been with APD since 2009, is in stable condition after being shot in the arm. 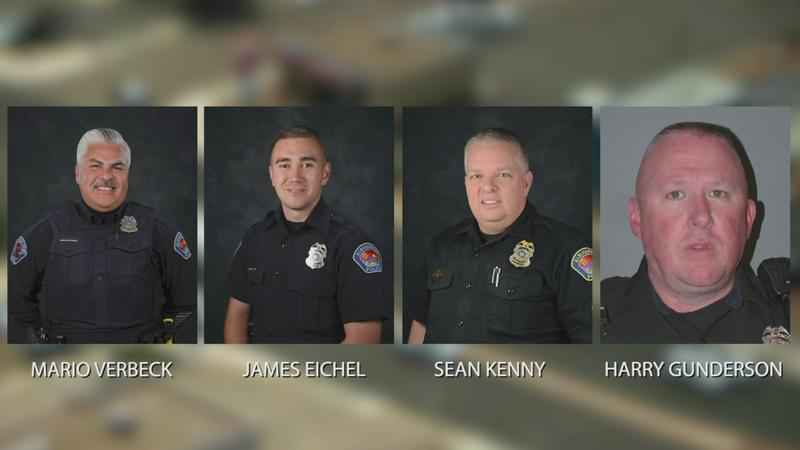 Kenny, who has been with APD since 1999, was treated and released from the hospital after being shot in his bulletproof vest.

Gunderson, who has been with APD since 2004, is in stable condition after suffering shrapnel wounds.

“We are incredibly grateful to the physicians and all the hospital staff at UNMH,” APD Chief Harold Medina said. “We continue to pray for the recovery of the brave officers who put their lives in harm’s way to keep the public safe.”

Meanwhile, Willoughby says their fellow APD officers are still showing up to work, serving and protecting our community.

"Every single day the Albuquerque police, the men and women that work in this department, they put that uniform on for one intended purpose and that’s to protect you," he said.

APD also released the name of the suspected shooter. They also seek help with information regarding a second person who was at the scene.