ALBUQUERQUE, N.M. — Traffic in many parts of the metro stood still Wednesday night as snow fell in the metro. Cars were sliding, people were walking along the streets, and main streets became parking lots.

"That was the first moment of chaos," said Jena Rue, who was on the road heading home from work. "You could just tell that people were starting to freak out. They couldn’t make it up the hill onto the freeway."

"That’s when I started to see people who were taking it into their own hands, because, three hours had passed and I didn’t see one truck, not one salt truck, not one plow truck, and I had not seen police up to that point," Rue said.

City officials said they did plan well in advance of the storm. Crews were out working – which is why many drivers were wondering how the road conditions got so ugly so quickly. 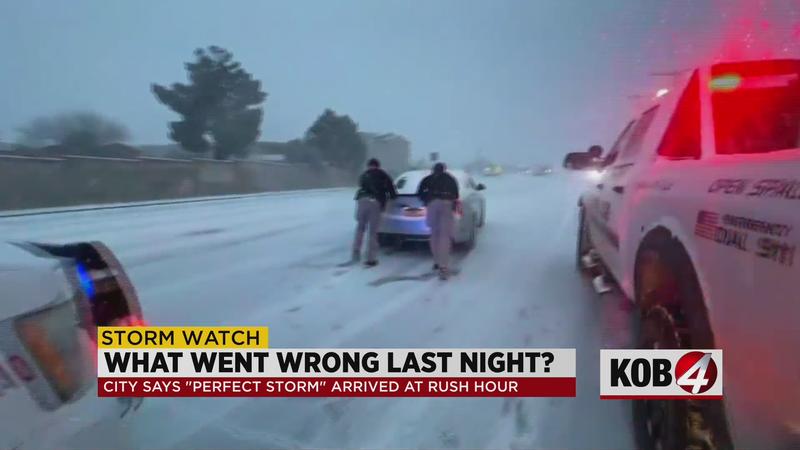 "No trucks out, I didn’t see any salt trucks, any shovel trucks, nothing, just people stranded and desperate," said Paul Szych, who was also stuck on the roads.

City officials said they had 36 trucks working 12-hour shifts, even on the day prior to the storm. The crews were treating the roads and waiting for the temperatures to drop. So why did some drivers not see any crews?

"It was a combination of three events, I call it sort of the Bermuda Triangle," said Pat Montoya, the director of the city’s Department of Municipal Development.

Montoya said everything happens at once – there’s blowing snow and the temperature drops right at rush hour. The trucks, like every other driver, wound up stuck in traffic. Montoya was stuck in traffic, himself.

"As I mentioned, I passed two big trucks that were stuck on Unser before you could get to Paseo that just couldn’t move around the vehicles that were there," Montoya said.

Officers were out on the streets too – monitoring the roads and even pushing cars. The Albuquerque Police Department responded to three crashes with injuries and 48 crashes with no injuries. BCSO responded to at least 28 crashes.

City officials said crews are hitting the major roadways and arterials Thursday because temperatures are expected to drop again.