APS’s decision to stay virtual comes as a disappointment to student athletes, coaches

ALBUQUERQUE, N.M. — APS student athletes will miss out participating in fall sports after the school board voted Thursday to remain virtual.

Many parents, athletes, and coaches said they think the decision was the wrong move.

“I don’t know. If you don’t understand what sports means to a lot of high schoolers, even spectators and fans, it’s a moral thing. It’s a reason why kids go to school. It’s the reason we care,” said Ryan Cook, a La Cueva senior and football quarterback.

“You know, we want to be role models to our community, to our peers to our teammates. We want to do right by who we represent. We can’t do that. It pains me knowing that there are so many kids in this state who have worked their entire lives for these moments. I’ve worked my entire life for this senior year,” he added.

Cook transferred to La Cueva from Alamogordo his junior year.

To Cook’s head coach, Brandon Back, football is a way of life.

“You know, keep grinding at it, keep pushing forward, there’s light at the end of the tunnel. We didn’t realize that the light at the end of the tunnel was a train driven by the governor and the school board, but that’s just the way it worked out. But it’s a daily mental health thing that we fight with them,” said La Cueva head coach Brandon Back.

Back said the team had been working out safely to prepare for an abbreviated season, however the school board’s decision came as a big blow.

“Everybody always says that,” Back said. “You gotta stay positive, but when you keep taking thing after thing away from them it’s very hard for these kids to see the positivity and what’s going on. And again, I think the hardest thing about this is that states around us have already done this. We’re not experimenting with trying to do sports. We’re in last place. We’re literally in last place trying to catch up.”

APS officials have asked the Public Education Department to allow student athletes to participate in sports without them being in a hybrid learning model. KOB 4 reached out to the PED to ask if they were considering it.

A PED spokesperson sent a statement that reads in part, "First, districts and schools must show they can safely reopen for in-person learning in the hybrid mode, with a clear and uniform definition of what that constitutes; second, we require a two-week pause to make sure the virus didn’t get a foothold; and third, we expand NMAA-sponsored extracurricular activities." 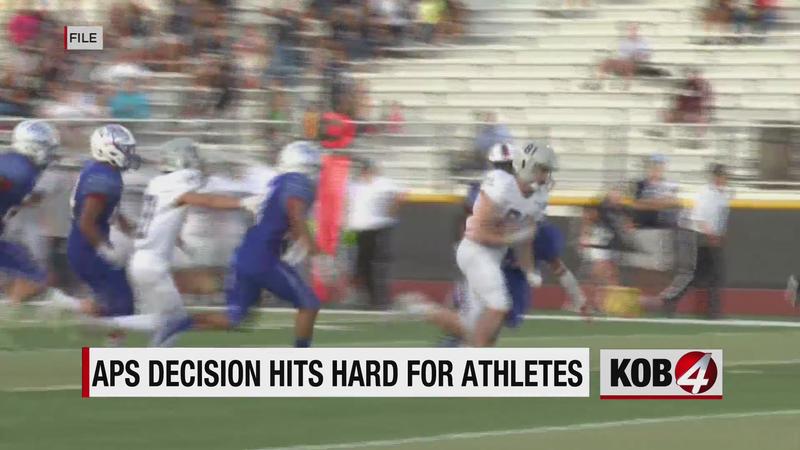