Officials say the fire has burned 56,478 acres and is 12% contained as of Monday.

For safety reasons, officials closed Highway 518 from Sapello north to Bueno Vista. On Sunday, the sheriffs’ office moved the road block closer to Las Vegas, it was three miles farther north, but with the fire inching close to the highway, officials are keeping people as far away as possible.

“It’s definitely scary, it’s different, like they said a while ago the worst part is the waiting game to see how everything turns out in the end it’s scary,” said Joshua Leyba, evacuee.

Extreme weather on Friday caused structure loss in nearby communities.

"We do not know the magnitude of the structure loss. We don’t even know the areas where most homes — made it through the fire, where homes haven’t been damaged or anything like that," said operation sections chief Jason Coil.

Fire crews say the village is still largely there but homes, and the golf resort lodge, were lost. Fire officials say it’s just too dangerous for crews to go in and look at all the homes that have been lost.

The San Miguel County Sheriff’s Office has issued mandatory Go evacuations as of 8 a.m. Friday. Due to the severity of the conditions, everyone in the area should be prepared to evacuate.

Evacuation centers have been established at the former Memorial Middle School at 947 Old National Road off Legion Drive in Las Vegas, at the Raton Convention Center, and at the Penasco High School gym.

Smoke: Fire activity around Rociada, Pendaries, and Sapello will cause unhealthy air quality conditions in the area. West winds will produce periods of Unhealthy to Sensitive Groups quality air in the Las Vegas area at times. Moderate conditions throughout the day are expected in the Las Vegas area. Periods of blowing dust, smoke will reduce visibility along portions of NM-518.

State Rep. Roger Montoya tweeted that the best routes are 518 and 434 toward Taos.

MORA EVACUATIONS (2:55 PM): Residents of Mora NM east of HWY 94, Rainsville, Ojo Feliz, and Guadalupita, Cañoncito, El Alto and all villages in between are ordered to evacuate immediately. The best possible to evacuate route are 518 and 434 towards Taos. 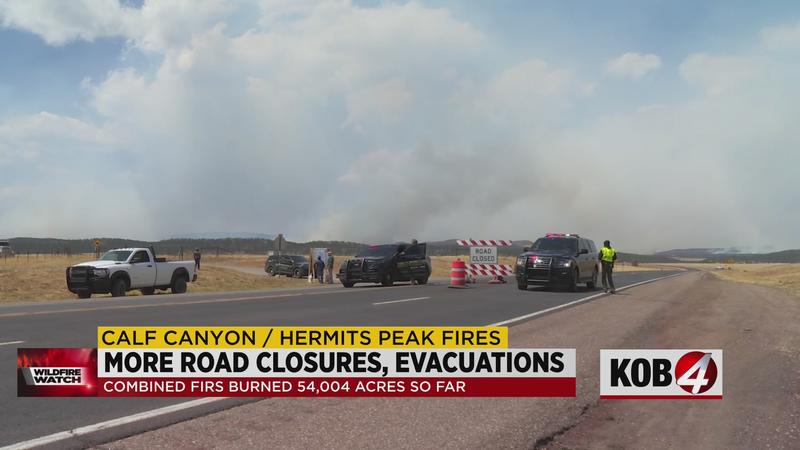