Update: The bill has been added to the governor’s call.

ALBUQUERQUE, N.M. — The head coach of the UNM football team is taking his fight off the field and into the Roundhouse. Coach Danny Gonzales would like to highlight the issue of discrimination when it comes to organ donation.

7-year-old Abby is Gonzales’ youngest child. She has Down syndrome. Gonzales and his wife, Sandra, have been advocating for Abby her entire life.

"We’re very, very blessed," Gonzales said. "A lot of children with Down syndrome do have – whether it be kidney, heart – they have a lot of organ issues."

Christy Sellers is behind Senate Bill 158, which Gonzales supports. Sellers hopes it will one day be called Glory’s Law – named after her youngest daughter who also has Down syndrome. 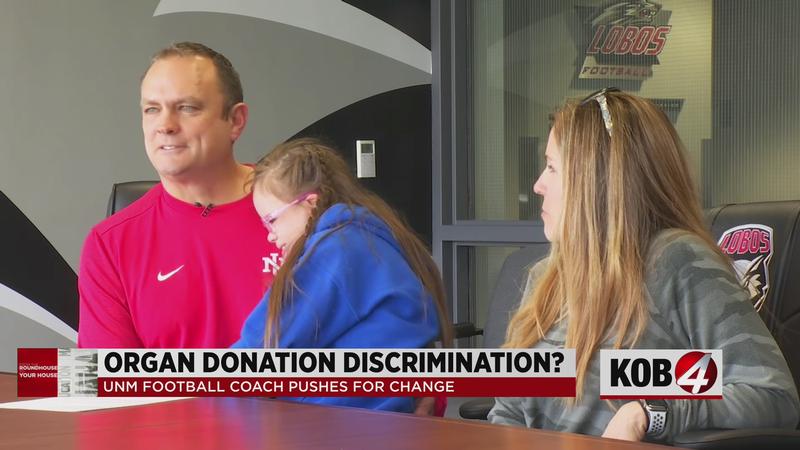 "New Mexico does not have a law that protects people with disabilities from discrimination if they needed a transplant," Sellers said.

She said the bill has bipartisan support and she wants New Mexicans to reach out to their representatives and the governor to give people with disabilities the same chance at organ donations as others.

"She’s a typical little girl and Down syndrome doesn’t define her, because she has Down syndrome should not mean she’s limited to resources or things that other people have. And that’s for anybody with a disability.," Gonzales said.

At this point, lawmakers cannot debate this bill because the governor has not put it on her agenda for this 30-day session. New Mexico’s constitution states that the governor sets the agenda every other year – this is one of those years.

If you want the governor to add SB 158 to the call, you can reach out here.

Track SB 158 during the legislative session.