ALBUQUERQUE, N.M. – Elexus Groves was convicted in the fatal car crash involving 14-year-old Kaylee Boling and her mother, Shauna, in 2017.

Groves was found guilty on two counts of causing death by reckless driving as an alternative to second-degree murder.

Groves could face up to 25 1/2 years in prison. Her sentencing will take place within 60 days. 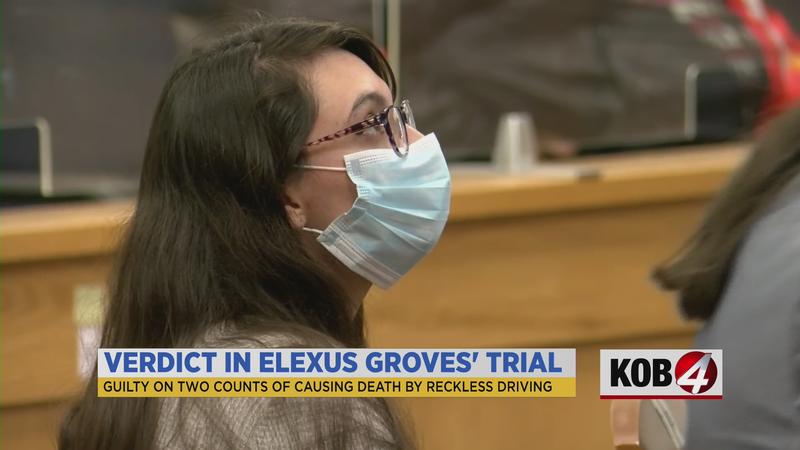 Groves fled law enforcement with a stolen van. She blew through an intersection with the van and crashed into Shaunna Arredondo Boling’s car. Shaunna and her daughter, Kaylee, who was in the passenger seat, both succumbed to their injuries.

Paul Garcia, Groves’s passenger, pleaded guilty to four charges July 20. Garcia, who testified against Groves, will serve up to ten years in prison with four years probation. His sentencing will also be announced at a later date.

After the couple was initially charged with first-degree murder in 2017, the husband and stepfather of the victims, David Arredondo, reached a settlement with the company that owned the van.

The first-degree murder charges were downgraded to second-degree murder after a judge sided with an argument by Groves’ attorney in April 2018. The District Attorney’s Office issued an appeal with the New Mexico Supreme Court.

The court ruled in December 2020 that defendants who cause deadly crashes while fleeing police can face felony murder charges under certain circumstances. After the ruling, the DA successfully reinstated first-degree murder charges.

During the couple’s hearing in March, an APD sergeant testified with his account.