ALBUQUERQUE, N.M. – Late Thursday night a man was shot and killed in downtown Albuquerque. According to witnesses, he was just trying to help a security guard who was being yelled at and threatened with a gun.

Patrick Saavedra was arrested Friday. His arrest warrant explains how multiple witnesses saw him shoot a homeless man in front of the transit center downtown.

It was around 1 a.m. when police arrived at the intersection of First Street and Gold Avenue, there they found a man who was shot in the chest, he died on the way to the hospital.

Police interviewed three Albuquerque metro security guards. One told police there was a white pickup truck stopped in the intersection so he walked up.

“He asked [the driver] if he needed assistance and [the man] started yelling to him that he was the mafia,” The security guard was quoted in the arrest warrant.

Then the man in the truck pointed a gun at the security guard. The other security guards saw this and started taking pictures of the truck’s license plate and the driver.

During the confrontation, an unknown homeless man walked up to the passenger door of the truck and told the driver to leave the security guard alone. That’s when:

“[The driver] started to yell and argue with the transient man [the security guard] heard a gunshot and saw sparks from inside the truck and the victim walked into the street and collapsed,” the arrest warrant explained.

It went on to say the truck sped off and the security guards called 911 trying to give first aid to the homeless man.

While the homeless man has not been officially identified, one woman who was in the area told KOB 4 she believes his name is Rodger and he slept under the Coal Street bridge. KOB 4 has not gotten that confirmed. Authorities are still working to identify him. 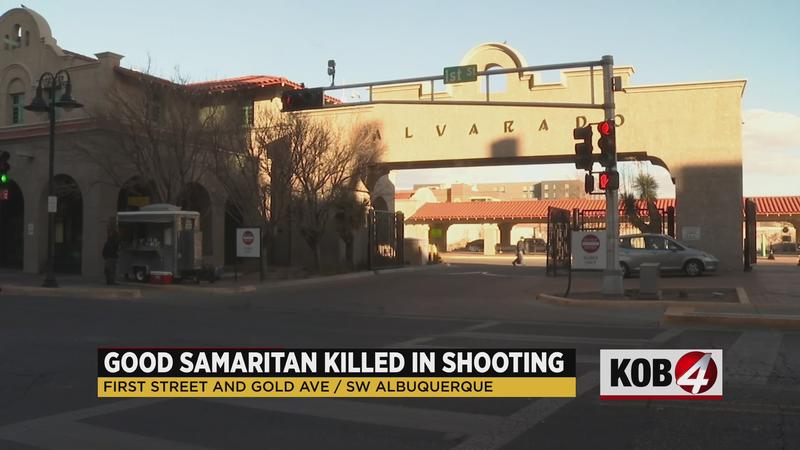