Note: Much of the video above may be disturbing to some viewers

Investigators’ reports show a breakdown in communication throughout a federal drug investigation and bring into question how much Jarrott knew about the suspect who shot and killed him at a traffic stop in southern New Mexico.

KOB 4 looked over hundreds of pages and hours of video and audio in state police incident reports.

Jarrott’s body cam video and the dash cam video show him pull over and approach the suspect, Omar Cueva, on Interstate 10 in Deming around midday. Jarrott asks Cueva to step out of his truck, and seconds after he does, Cueva begins shooting. He hit Jarrott at least six times, including once in the back of the head. 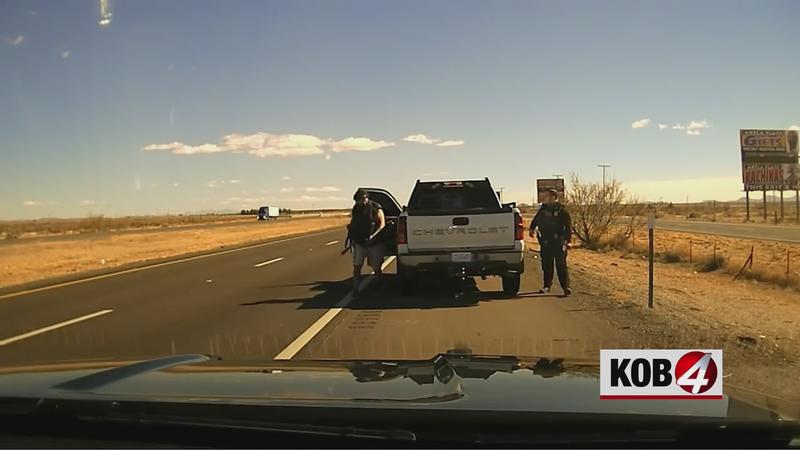 Cueva sped off, headed east, shot at more officers, and injured one in Las Cruces, before police shot and killed him.

Back in Deming, federal agents in tactical gear arrived on scene within minutes, but could not save Jarrott.

The investigative reports reveal two federal agents watched the shooting happen from about 200 yards away.

Other details in the reports help explain why.

According to the investigation reports, Jarrot had limited information about Cueva. The information he had came from a BOLO, or “be on the lookout,” which said Cueva was a drug dealer with a criminal history known to carry a gun. It also says, “Officers must Develop their own pc (probable cause) for stop and subsequent search.”

It’s unclear if Jarrott knew that a different state police officer was supposed to pull Cueva over that day.

Federal agents with Homeland Security had orchestrated a drug buy that day for five pounds of meth in Las Cruces. It would have been the second time an undercover agent had bought from Cueva.

There was also surveillance of Cueva getting on the road that day.

There were two plans within the sting operation.

The first plan called for a different state police officer to pull Cueva over while he was on route and then call some of the many federal agents who were geared up in armored SUVs on I-10, ready to take Cueva in.

If that didn’t happen, the second plan was for a buy bust, in which agents would storm the drug deal in Las Cruces.

Before any of that could happen, Jarrott had made the stop.

There was a briefing that morning, but the investigators’ report shows no one from state police was a part of it.

Jarrot was reporting to state police Sgt. Mark Madrid. Investigators asked him a lot of questions:

Sgt. Madrid: “An individual was supposed to come into Deming with a load of drugs.”

Investigator: “Was there a criminal history done on this guy that you know of?”

Sgt. Madrid: “No. We were just going off the BOLO that came out.”

Investigator: “Have you ever dealt with the suspect?”

Madrid said the BOLO was just like the ones they get every day, and he had talked to Jarrott on the phone about it.

“You see one of your guys that you just talked to, a young kid, sitting there — for what s*** did we lose our lives over? I don’t get it. I don’t understand it,” Madrid said to investigators.

Madrid says he never would have allowed Jarrott to stop Cueva if he had known what federal agents knew: that Cueva was a felon, that there was a sting operation and that an undercover agent reported Cueva saying, “if anyone tries to arrest him, he is not going back to prison.”

Federal agents say they didn’t expect it to be Jarrott who stopped Cueva.

“That’s why we were surprised as to whoever made the stop. Initially, we thought Leo (another state police officer) was going to make the stop because he knew — everybody knew this guy was dangerous. It was going to be a high-risk kind of stop,” Huerta said to investigators.

He says he did warn state police that Cueva was dangerous and that federal agents should be there for backup.

“I had talked to Sgt. Madrid last night. We explained to him, ‘Hey, listen, we’re looking for this guy,’” Huerta said. “And he said, ‘Okay, we’ll be on the lookout also.’”

The investigative reports say, “Agent Huerta stated he does not know where the breakdown in information happened.”

There’s a wrongful death lawsuit on the way, alleging that Jarrott did not have enough information on Cueva before stopping him. The attorney says they plan to file against both the state and Homeland Security.

KOB 4 asked both federal agents and state police to comment or respond to what the investigation shows.

A Homeland Security spokesperson sent a statement, saying the agency can’t comment on ongoing legal matters, and, “A lack of comment should not be construed as agreement with or stipulation to any of the allegations.”

A New Mexico State Police spokesperson sent a statement, saying investigations like these are complex, and, “As a police agency, we will always choose accuracy and thoroughness over a speedy investigation.”