Lawmakers wrapped up at noon. In the Senate, Republicans killed a controversial voting rights bill with a three-hour filibuster – after the House pulled an all-nighter trying to get that bill to the finish line.

The bill would have restored voting rights to felons, allowed 17-year-olds to vote in certain elections and create protections for poll workers. Republicans opposed the bill, and Sen. Bill Sharer, R-Farmington, filibustered for nearly three hours – talking about baseball and the price of hotdogs. He ran the clock down, blocking the last critical vote to pass the legislation.

Democrats were upset with the outcome.

"Shameful," Speaker of the House Brian Egolf, D-Santa Fe, said. "To deny an opportunity to New Mexicans to have easier access to the ballot, making a mockery of the process by reading rules of baseball. It’s a joke, it’s sad. He should be ashamed." 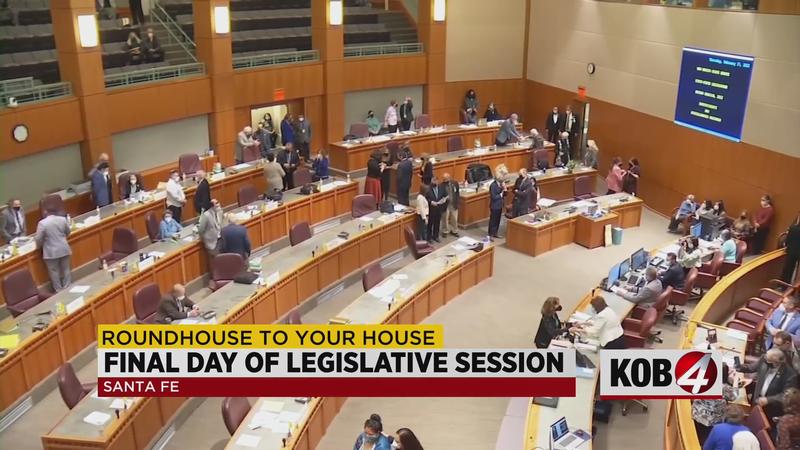 Here’s what’s inside the massive public safety package heading to the governor’s desk:

The governor got some education wins – teachers will get a big pay raise, about $10,000 more per year.

The opportunity scholarship also passed, that will allow New Mexicans who aren’t eligible for the lottery scholarship to go to college and create ways for more people to attend community college and trade programs.

"What changed is a conversation I had at the dinner table with my family," he said. "I don’t like to talk too much about what is said between me and my wife and kids, but the outcome of that conversation was that I need to make this my last two years."

She even had a ceremonial removal of the masks with other lawmakers at the Roundhouse. After that, she praised legislators for what the session achieved – but also said she wished they had done more on key issues.

Lujan Grisham is still on board with some form of pretrial detention and hinted she might back an effort for another bail reform constitutional amendment. For now, she will focus on adjusting the nuts and bolts of how pretrial detention works.

"New Mexicans should expect me to insert myself squarely into that administrative work right now," she said.

The governor didn’t get voting rights changes or the hydrogen production package she wanted. With a record-high budget to comb through and a tough reelection campaign to kickstart, the governor pushed aside the thought of a special session.

"There’s no announcement today," Lujan Grisham said. "No intention of that. But I will hear from New Mexicans in the next 20 days and their voices matter."