SANTA FE, N.M. — A leaked "Be On The Lookout" alert has gone viral on social media – fueling a rumor that Mark Lopez, an innocent Española man, is the suspect connected to Wednesday’s double-fatal crash on I-25.

The BOLO from New Mexico State Police was never meant to go public. Investigators told KOB 4 they determined Lopez had nothing to do with the tragedy.

Lopez is embarrassed and, frankly, scared since so many people have shared that confidential alert that contained all of his personal information.

"I feel very violated, my character, my job, just everybody in my professional, my friends, you know, this is very, very embarrassing," Lopez told KOB 4.

Video from his home security system shows multiple state police officers approaching his home, but he wasn’t there at the time. When he got home, they had questions for him about his whereabouts – but never explained why they were interviewing him. It wasn’t until his wife started getting messages about the BOLO they saw on social media that they began to realize what was going on. 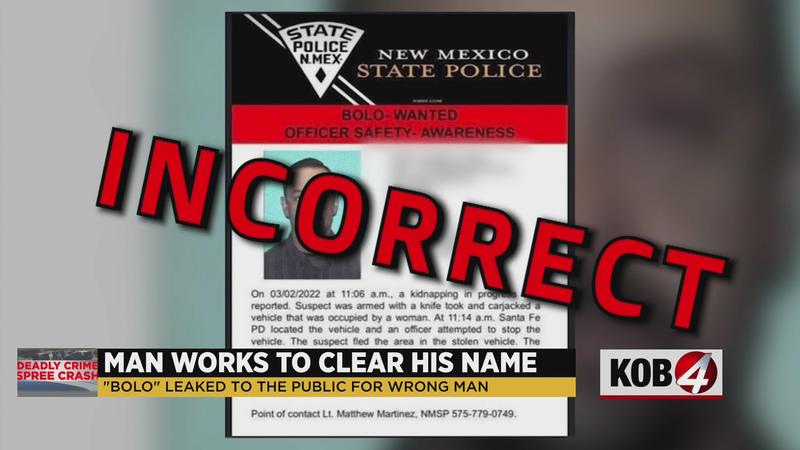 State police confirmed that Lopez has been completely cleared in this case, and the BOLO alert was only meant for law enforcement. Some law enforcement agencies even posted it on their social media accounts, but have now taken it down.

"I understand that an officer has been lost and everybody’s really excited and eager to solve this case, but they need to read the flyer that they are sharing because all my personal information – social security, driver’s license, date of birth – is there," Lopez said.

So why was Lopez a target? He said investigators told him a witness gave them his name, but he doesn’t know that witness – and an employer confirmed to police he was at work all day Wednesday.