207 homes have also been lost since the McBride Fire began Tuesday afternoon on McBride Drive. A Type 1 Incident Management Team took over the fire response at 6 a.m. Thursday, as evacuations remain.

While the fire is still 0% contained, firefighters have held it from moving into town – but winds are moving it northeast toward the airport.

Wind gusts of 30 MPH are expected Thursday afternoon, which will allow helicopters and air tankers to safely help address the fire.

The Type 1 team will also be bringing in operational and logistical help to support the 250 people who, in the last two days, have fought the McBride Fire and the separate Nogal Canyon Fire nearby. 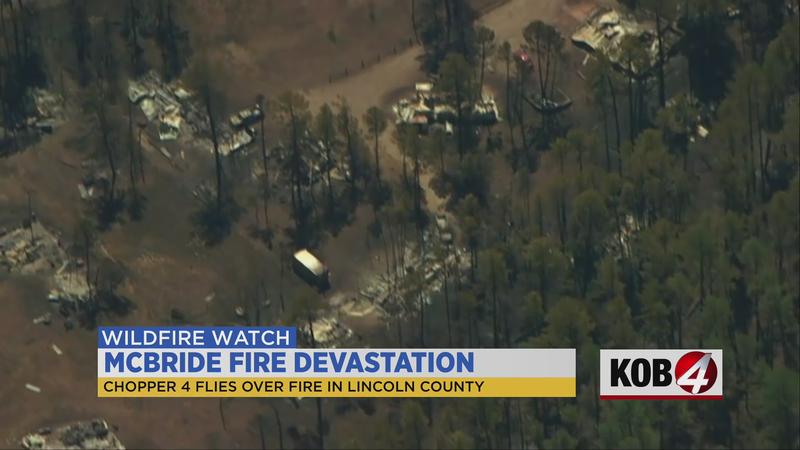 The McBride Fire began Tuesday on McBride Drive and, in just a few hours, burned 4,132 acres. Officials initially estimated the fire to be 15,000 acres, but that changed after the smoke subsided.

Donald and Jan Mcdonald moved to Ruidoso six years ago, but their paradise is now up in smoke.

"I’ve never seen anything like that. It just overpowered the whole horizon," said McDonald.

McDonald saw it creeping quickly toward his property and they were out of the house within twenty minutes.

"We didn’t even have time to think about it. It was like just react. Just do what we gotta do and get out,” he said. "It’s one thing to watch all this on the news but to witness it, be a part of it, and a friend of mine already said ‘you won’t be able to get that out of your head. Ever.’"

They live on Timberline Drive, high above the town of Ruidoso. They returned for a moment Wednesday morning – to find their home still standing tall.

"Seeing what’s unfolded, a lot of people, they can’t say that," said McDonald.

Including a number of their neighbors, they say at least eight homes on their street are total losses.

"How blessed are we that our house didn’t burn," McDonald said.

KOB 4 talked with the McDonald’s at the Ruidoso Convention Center – that is still accepting evacuees. It’s staffed with Red Cross volunteers ready to help.

They estimate at least 200 people passed through the shelter Tuesday night.

Authorities say the fire jumped Gavilan Canyon Road leading to the evacuation of all of Gavilan Canyon, behind the McDonald’s restaurant.

The Type 1 team responding to the fire is the top-level team trained to fight large-scale, complex incidents, including large wildfires or events of national significance. For example, Type 1 teams were called in response to 9/11 and Hurricane Katrina.

Mandatory evacuations remain in place in the following areas:

The cause of the fire has not been determined at this time. High winds have caused power outages and many downed trees and power lines Tuesday.

Power and gas are still out in parts of Ruidoso, due to the fire. PNM was able to safely restore power to about 530 customers in the Ruidoso area but they are working with Otero Electric and Zia Natural Gas to restore power. Crews are on the ground working nonstop – section by section – to get power back online in phases. If residents need a mobile hotspot, the Mescalero Apache Travel Center has one up and running.

According to Ruidoso Municipal Schools, all students were evacuated to the Ruidoso Convention Center for parent pick-up. Authorities said crews were able to knock back the fire near the Ruidoso Middle School and evacuate more than 1,700 students from multiple schools in just an hour and a half.

Ruidoso schools were closed Wednesday due to the fire and remain closed Thursday.

Evacuations for Livestock and Animals

A state of emergency has been declared for the Village of Ruidoso. If you’re looking to make donations or volunteer in some capacity, please call (575) 258-6900.

Due to concerns over smoke, inpatient surgery patients and ICU patients at the Lincoln County Medical Center will be transferred to other facilities. Officials said the hospital is not evacuating and will continue to provide care to provide urgent needs.

Anyone on GAVILAN CANYON ROAD in @VillageRuidoso needs to evacuate NOW.

Officials say the fire has jumped the road. This impacts more than 4,000 people. @KOB4