LAS VEGAS, N.M. — Exactly one month ago, a prescribed burn got out of control. The Hermits Peak Fire, combined with the Calf Canyon Fire, is now the largest active fire in the country.

Crews are racing to build more containment lines to prevent the Calf Canyon/Hermits Peak fires from spreading before the strong wind arrives. The combined fire has burned more than 168,000 acres and is just 20% contained. On Friday, crews focused on clearing out fuels, protecting homes, and using all the aircraft at their disposal to clear up hotspots.

Fire officials are worried the wind will push the fire across containment lines similar to last week. The incident commander told KOB 4 that the wind can carry embers a long way into fresh territory.

"Under high wind events like we are expecting this weekend, we could see spotting up to a mile – half-mile to a mile – which is pretty extreme," Dave Bales said. 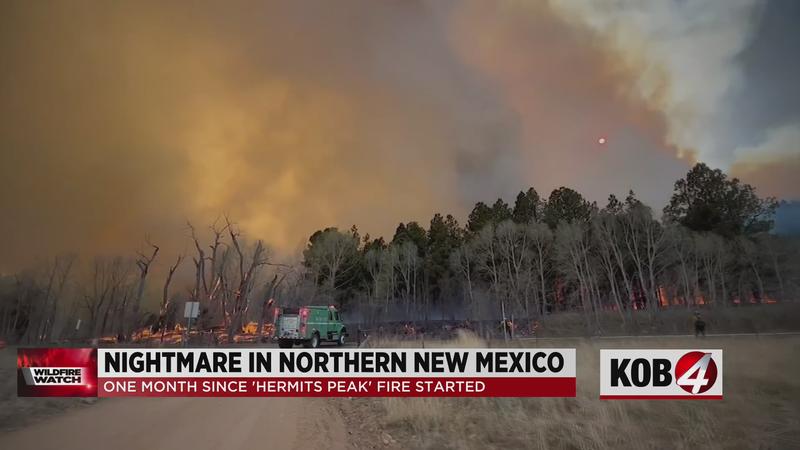 The area has seen gusts of 60+ mph before, but what makes this weekend historic is the fact that the wind will be sustained for days, not just a 24-hour period.

"We’re going to use federal resources, state resources, local resources, private sector resources, and we’re going to do everything in our power," Gov. Michelle Lujan Grisham said during a briefing Friday. "I feel pretty confident that we will be able to deliver, getting a number of manufactured housing units available and placed in safe areas."

The governor said the state is making every effort to secure as many benefits as possible.

"I want all of it," Lujan Grisham said. "I don’t know how much the state will be eligible from the feds, but we’re going to ask. If there’s a benefit, I want it made available. Whatever that is… shelter, housing, livestock, fencing, pets, utility assistance, unemployment assistance, which we already have available now that the declaration is signed."

A disaster declaration signed by President Joe Biden earlier this week unlocks funding that will go directly to New Mexicans. FEMA officials are encouraging those who have insurance to submit a claim first, then apply for federal aid anyway, because the agency may be able to help cover what insurance companies cannot.

"Don’t give up," said Sandy Eslinger, FEMA coordinator. "The reason why we’re putting people out there on the ground is to help people get registered if they’re having problems with the process."

EVACUATION UPDATE (4 p.m. May 6) — New evacuations have been issued for the communities of Holman and Chacon in Mora County. Evacuees leaving Mora must utilize Highway 434 to Angel Fire, 442 to Wagon Mound or 518 North to Taos. These roads are open for evacuation only – no reentry is allowed. The nearest shelter is Peñasco High School. If you need help evacuating, call New Mexico State Police at (505) 827-9300.