ALBUQUERQUE, N.M. – Police say they arrested the suspected driver Saturday — Jeannine Jaramillo. They say she lied about being kidnapped and that there was actually no one else in that car with her.

According to police say she is responsible for the chase on I-25 and she’ll be facing murder charges. They said this all comes down to a web of lies Jaramillo told not only investigators but also KOB 4, when we questioned her about it Friday, nearly 24 hours before she was arrested and charged.

"The New Mexico State Police have concluded through our detailed investigation that there was never a kidnapping or a male suspect involved," said a spokesperson with the New Mexico State Police during a press conference. "Jaramillo’s actions put the entire public in danger and took the lives of two dedicated public servants. She caused a senseless tragedy that has impacted Santa Fe, Las Vegas, and all of New Mexico."

The victim turned suspect is responsible for everything, and there was never anyone else besides Jaramillo in the car.

"We believe Jaramillo led officers on a chase, driving the suspect car and causing the fatal crash that killed officer Duran and Mr. Lovato.”

Jaramillo was taken into custody Saturday and faces multiple charges, including two counts of first degree murder. They also brought up Jaramillo’s criminal past, where she has had multiple run-ins with the law.

"Her statement during the incident is suspiciously similar to her statement in this incident, including a male subject holding her against her will with a knife to her neck."

They are talking about an incident from just a few months in Cibola County. Investigators then determined there never was a suspect in that case either.

But what led to her arrest was the data they obtained from the car police say she was driving. It revealed there was no other person in the car and her DNA was on the driver’s side airbag.

"There is without question, sufficient cause to assert that Jaramillo was driving a stolen vehicle willfully and freely from any kind of duress when she fled from law enforcement," said Santa Fe District Attorney Mary Carmack-Altwies.

Jaramillo is being held at the Santa Fe Adult Detention Center. KOB 4 was told that on Monday, the district attorney’s office will file a motion for pretrial detention to keep her behind bars until her trial. 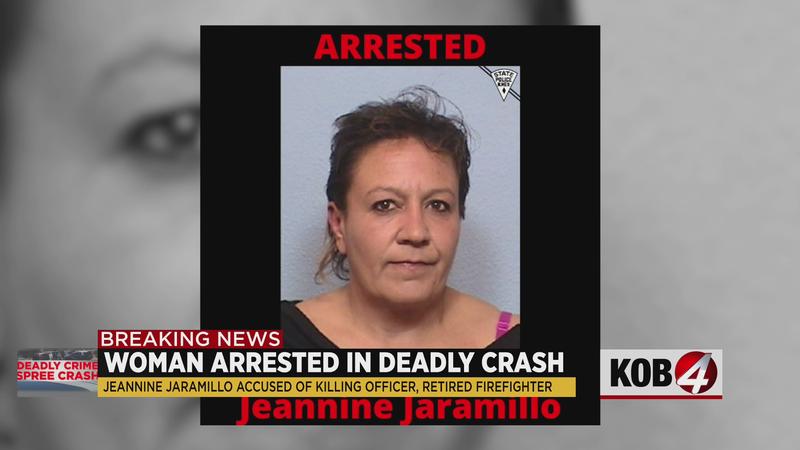