SANTA FE, N.M. – A Santa Fe police officer and a Las Vegas, N.M. firefighter were killed Wednesday in a crash on I-25. Authorities said police were pursuing a kidnapping suspect driving the wrong way the interstate when the crash happened. The suspect is still at large.

Santa Fe police first received a report around 11:06 a.m. of a kidnapping in progress at the Rancho Vizcaya Apartments and a man armed with a knife taking a vehicle occupied by a woman. Police found the vehicle around 11:14 a.m. and tried to stop it but the driver fled in the vehicle. A pursuit was then initiated near Sawmill Road and St. Francis Drive.

The officer and the retired firefighter involved in the crash were pronounced dead at the scene.

The female victim exited the vehicle and was transported to a local hospital, where she was treated for non-life-threatening injuries. She was later released. 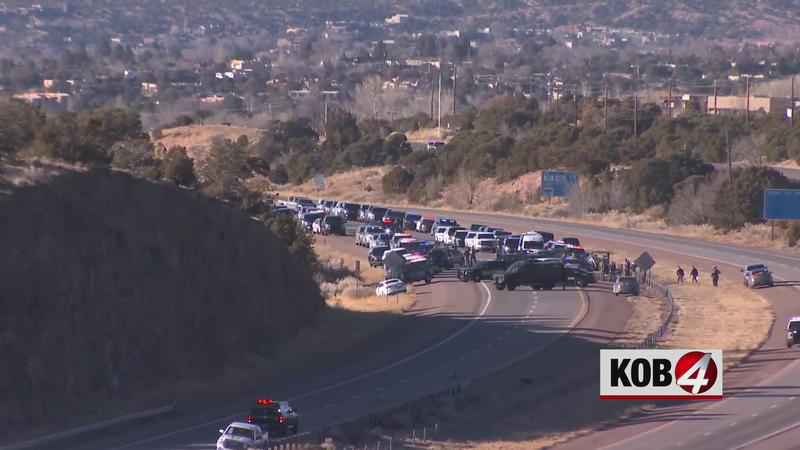 Police encouraged residents in the area to stay in their homes. Authorities said the Santa Fe Waldorf School was under a shelter-in-place order due to police activity in the area.

I-25 was closed in both directions – at mile marker 284 northbound and mile marker 290 southbound – for motor vehicle and pedestrian traffic.

The Santa Fe police officer killed was Robert Duran, 43, of Rio Rancho. He joined the Santa Fe Police Department in 2015. He was married with two teenage sons. Paul Joye, SFPD interim police chief, said he was well respected and loved by his peers.

Gov. Michelle Lujan Grisham has ordered state flags to fly at half-staff through sundown Monday, March 7, in mourning for Duran.

The other motorist killed in the crash was Frank Lovato, 62, of Las Vegas, N.M. Lovato was a retired firefighter who had served with the Las Vegas Fire Department for more than 20 years.

LATEST ON THE SUSPECT

SFPD Interim Chief Paul Joye said they believe they know the identity of the kidnapping suspect – but he is still on the run as of Wednesday night. State Police Chief Tim Johnson said they will be taking over the manhunt for the suspect. He was described as wearing a red shirt, black pants, and a black jacket.

Johnson also said the state police will come to Santa Fe Thursday to cover every call for service so that Duran’s colleagues can grieve.

In an updated release Thursday night, New Mexico State Police said they do not believe that there is an ongoing threat to the public.

After the crash, the kidnapping victim got out of the suspect’s vehicle and was transported to a local hospital. She was treated for non-life-threatening injuries and was later released.

Anyone that witnessed the moments just after the crash and might have seen the suspect’s vehicle, the occupants of the vehicle, or has any information related to this investigation is asked to contact New Mexico State Police Investigations Bureau Sergeant Andrew Jorgenson at 505-490-3871 or Agent Wyatt Harwell at 505-316-5254.

“Tragically we have lost one of Santa Fe’s finest, a devoted police officer who gave his life in the line of duty and in service to this community. Our hearts are heavy, our community shocked and saddened by this tragic loss. We are thinking of his family. We send them our condolences and our love and extend our hands, our hearts and our hugs in sympathy. This hurts. And we are all hurting together.

We also remember the innocent civilian whose life was lost in this tragedy. To her family and friends, we send our thoughts and prayers.

“Heartbreaking news. We have lost one of the state’s finest public servants, killed in the line of duty while protecting the citizens of Santa Fe and New Mexico. It’s a sacrifice no one should have to make. The Department of Public Safety stands ready to assist. We mourn the innocent citizen and our colleague. We express our profound sympathy to the family and friends of both, and to the Santa Fe Police Department.”

I am deeply saddened over the news that our former friend and retired hero/firefighter Frank Lovato has passed away from the tragic accident on I-25 yesterday. Prayers

and remembrances are with his family and loved ones. Frank served the city honorably for two decades and his loss is a surprise and shock to this community