ALBUQUERQUE, N.M. — Chaves County is still stuck Level Yellow after the state released its latest Red-to-Green reopening map Wednesday. It is the only county in the Yellow level, and no counties remain in the Level Red.

One Roswell resident said even though his opinion as to why the county hasn’t budged may not sit well with others, the reason is obvious.

“I’m not surprised just because the difference you can tell coming from Roswell from other cities. You can tell how other cities take the mask mandate very seriously and stores don’t really allow you to go into without a mask, but Roswell you can go in anywhere without a mask,” said a college student.

During the state’s Wednesday update, the map showed that Chaves County only met one of the reopening metrics, which was a test positivity rate lower than 5%. The county still hasn’t met the vaccination rate of 40%, or the target rate of 10 positive cases per 100,000 people. 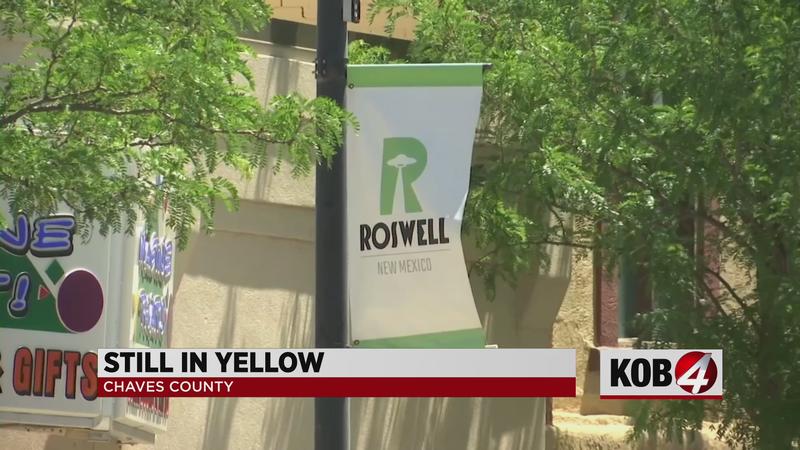 Davis Morgan, from the New Mexico Department of Health, said it’s possible people are getting vaccinated in Texas and not being counted in New Mexico.

Some local business owners said they believe the color system is unfair, and feel targeted by the governor.

With tourist season right around the corner, the restricted capacity under Level Yellow could hurt businesses once again.

“When the summer gets here we’re probably going to be looking at anywhere around 40 to 50 people at any given time, and if we’re still in the yellow that would greatly impact that,” said Donald James, owner of Ancients of Days Rock Store.

James also said he disagrees with the state’s 60% vaccination requirement, and said it should be a choice and not what he described as being “forced into it”.

Many Roswell business owners that KOB 4 spoke with felt the same way, but declined to go on camera for this story for fear of retaliation.

As for the people who have vaccine hesitancy, Dr. Davis Scrase from NMDOH had this reminder.

“We are here not for politics, we’re here for public health, and in the goal of getting vaccinated with COVID-19 is to be able to protect your life and everyone’s life in New Mexico,” Dr. Scrase said.